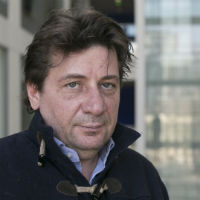 Professor Pinelli holds a BSc degree in Aeronautical Engineering from the Milan Polytechnic, a postgraduate diploma course from the von Karman Institute of fluid dynamics and a PhD degree in Applied Mathematics from the École Polytechnique Fédérale de Lausanne obtained in 1994. In 1995 he moved to the laboratory of numerical fluid mechanics of the School of Aeronautics of Madrid Polytechnic (ETSIA) having been granted a Marie Curie postdoctoral fellowship. During his period at the ETSIA he has collaborated with Prof. Jiménez in the study of wall turbulence using Direct Numerical Simulation. In 1999 he became an associate professor of applied mathematics at University Carlos III in Madrid.

Since 2001 he has led the Modeling and Computational Lab at CIEMAT (Centro de Investigaciones Energeticas Medioambientales y Tecnologicas, Madrid) widening his research interests to the simulation of environmental flows, fluid structure interaction, lattice Boltzmann methods and immersed boundary techniques. Since 2004 he was also appointed as associate professor of applied mathematics at the faculty of mathematics of the Universidad Complutense in Madrid. In June 2013, Alfredo Pinelli was appointed as professor of fluid simulation at City University. Prof. Pinelli has participated in several National and European research projects and has extensive collaborations with other researchers in EU, Canada, Japan and US.