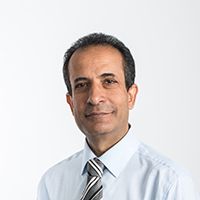 Director of the Thermo-Fluid Research Centre

Professor Sayma obtained BSc in Mechanical Engineering with Distinction from Birzeit University in Palestine in 1987, MSc in Energy Technology from Salford University in 1990 and PhD from UMIST in 1994. His thesis topic was Finite Element model for dense gas dispersion in the atmosphere. He joined the Aeronautics department at Imperial College London in 1994 on EPSRC funded project as a research assistant where he worked on the development of an external aerodynamic compressible flow model introducing boundary layer grids and viscous effects in the Euler solver.

He Joined the Department of Aeronautics at Imperial College London in February 1994 as a Research Assistant working on the development of unstructured grid compressible flow solvers for viscous compressible flows with application for flow around complete aircraft. Subsequently, In 1996, he joined the Rolls Royce Vibration University Technology Centre (VUTC) at the Department of Mechanical Engineering, Imperial College London, where he stayed for about 9 years. He progressed to a Research Fellow, Senior Research Fellow and then Principal Research Fellow. In 2001, he was awarded the title RolIs Royce reaserch fellow at Imperial College and in 2003 he was awarded a Royal Academy of Engineering Senior Research Fellow co-funded by Rolls-Royce Plc. During his spell at the VUTC, he was one of two main developers for the unsteady aerodynamics and aeroelatisity code AU3D which has been the main aeroelasticity system at Rolls Royce. He also contributed to several major aero-engine projects including analysis of compressors, fans, turbines, rotating cavities, intake and bypass ducts and downstream nozzles.

In 2005 he became a Senior Lecturer in Computational Mechanics at Brunel University. A year later, he was appointed as a Professor of Computational Fluid Dynamics at the University of Sussex where he worked at the Thermo-Fluid Mechanics Research Centre (TFMRC) at the Department of Engineering and Design. He continued to lead research in unsteady compressible flow in turbomacinery, where he focused on industrial gas turbines and micro-gas turbines. He held several senior administrative positions, the last of which was the Director of Research and Knowledge Exchange for the School of Engineering and Informatics. He also introduced a new MSc in Sustainable Energy Technology.

He has led the Cycle Efficiency Technical Committee at the European Turbine Network (ETN) and has been a member of the ETN Project Board since 2014. He is the founder of the European Micro-Gas Turbine Forum (EMGTF) which was established in 2017 and has been the chairman of its advisory board.

Major research projects led: the EU FP7 consortium for conducting research and demonstration of a concentrated solar power system powering a small-scale micro-gas turbine (OMSoP), 2013-207, the Newton project jointly funded by InnovateUK and the Ministry of Science and Technology of China (MoST) on the development of concentrated solar power micro gas turbine technology coupled to thermal energy storage (SoLGATS) 2017-2019, The EPSRC funded project, Fundamental studies of Organic Rankine Cycles (NextORC), 2017-2020, and the Marie Curie Innovative Training Network, Next Generation of Micro Gas turbine technology for high efficiency and low emissions (NextMGT) 2020-2023. He has also led the Turbomachiney work package the EU project H2-IGCC 2009-2013 which aimed at the development of micro gas turbine technology for hydrogen-Rich Syngas and he is currently leading the Turbomachinery work package in the EU H2020 project SCARABEUS aiming at the development of supercritical carbon dioxide cycles for concentrated solar power plants.