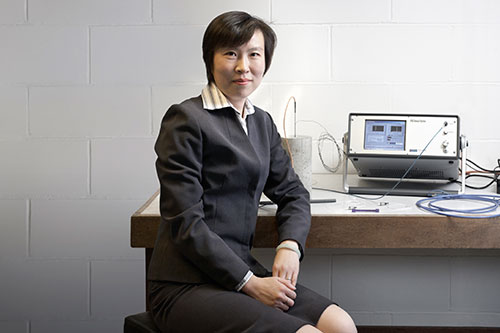 Measurement and the instrumentation by which it is implemented are key to industry today. City University London has been a world-leading force in the field since the early 1970s, with expertise spanning areas as diverse as medical diagnosis and the control of manufacturing processes.

Tong Sun, Professor of Sensor Engineering (pictured), joined the University's renowned Instrumentation and Sensors Research Centre in 2001, having gained undergraduate, postgraduate and doctoral qualifications from the Department of Precision Instrumentation at Harbin Institute of Technology, China, and then taught at Nanyang Technological University, Singapore.

Her research focuses on optical sensors and their application in hostile environments in which traditional electrical or physical sensors would fail. The application of such devices promises to revolutionise many industries and make the world a safer, more reliable place.

Sniffing out the 'smell of fear'

In 2008 and 2009 City was awarded Â£550,000 in funding from the Engineering and Physical Sciences Research Council (EPSRC) for two projects that are investigating the potential to use optical sensors to identify illicit substances and criminal or terrorist behaviour in public areas and at border crossings.

"Today there is an array of sensors being used at airports, ferry terminals and big events such as sports matches. We're all familiar with X-ray machines and metal detectors and you could even class sniffer dogs as a form of sensor. Our work, however, is designed to offer a better, more cost-effective and portable solution."

The projects, which are also supported by the Home Office Scientific Development Branch, have two key objectives. Firstly, to see whether robotic noses could replace sniffer dogs to track down illegal cargos such as explosives or drugs. Using animals in this context has several drawbacks - they must work in short shifts and require expensive training and upkeep - so an automated system would be welcome. A second aim is to assess the feasibility of using novel smell sensors to detect the 'fear' pheromone - a key physiological indicator that could be correlated with abnormal human behaviour.

"Pheromones are the chemical signals that all animals emit in order to broadcast information about their status to others,"

We are assessing how the human pheromones associated with fear can be measured, and the viability and efficacy of using this information to help spot suspicious behaviour in security-critical settings." 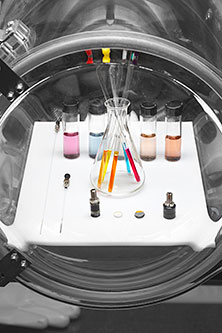 The corrosion of steel in reinforced concrete is a massive problem. Â£550 million is spent on the maintenance and repair of concrete structures each year in the UK alone, while the cost of concrete corrosion in India is equivalent to 3 to 4 per cent of its gross domestic product annually. Although maintenance may be costly, failing to preserve structures is far worse - five people were killed in Canada in 2006 when a concrete bridge collapsed due to corrosion induced by road de-icing salt.
Addressing this problem is a series of research projects funded by the EPSRC, in which Professor Sun and her partners aim to develop optical fibre corrosion sensors. This includes the prestigious EPSRC Challenging Engineering Grant of Â£500,000, awarded to Professor Sun and colleagues at Queen's University Belfast (QUB) in 2005, recognising her as one of the research leaders in the field in the UK.

This was followed by a Â£237,000 award from EPSRC under the 'Collaborating for Success Through People' scheme, which sees Professor Sun working with an international consortium that spans academia and industry to develop and test durable, in-situ sensors that can measure the key variables related to concrete corrosion: pH, chloride and humidity. The commercial potential of the sensors has now been recognised by Â£210,000 in follow-on funding from the EPSRC, enabling City to work with QUB, Network Rail, Road Services in Northern Ireland, Sengenia Ltd. and Amey Consulting to develop a viable product. Professor Sun comments:

"This work promises to provide industry with access to improved data on concrete corrosion, enabling timelier and more cost-effective maintenance of buildings in harsh environments, such as marine structures and railway bridges."

The latest application for these innovative sensors is pantographs - overhead power lines - for railways.

A City team will develop an early warning system that identifies emerging overhead wire defects before they escalate and cause expensive system failure - known as a dewirement. A prototype will embed City's novel optical sensors in pantographs to measure critical strain and temperature parameters at strategic locations. This has not been feasible before, since electrical sensors would be affected by the high voltage that the wires carry.

"Significant dewirements occur approximately five times a year in the UK, rendering tracks unusable until the overhead transmission system is repaired. This costs the rail industry millions of pounds due to track closures, but also affects the wider UK economy."

The project is another which is supported by the EPSRC, with Â£102,000 provided by the Research Council's Collaboration Fund. City engineers will work with transport professionals within the City Collaborative Transport Hub - one of the University's interdisciplinary centres - as well as private sector partners and industry associations such as Brecknell Willis, Morganite Electrical Carbon Ltd., Network Rail and the Rail Safety and Standard Board.

"City has such a long heritage in measurement and instrumentation and we think of new uses for our technology every day. I believe strongly that the work we're doing will have a huge impact on society in future."