New study from City suggests that in the future glaucoma eye tests could be performed at home.

Glaucoma is a chronic condition that affects cells at the back of the eye. It is the leading cause of irreversible blindness worldwide, and is responsible for 1 in 10 cases of serious sight impairment in the UK.

People with glaucoma, or at risk of developing glaucoma, require lifelong monitoring, including regular eye tests to track the progression of the disease. Currently, these examinations require regular hospital visits (e.g., twice yearly, for life) and use expensive, specialist equipment.

Aging populations make this hospital-only model of patient-management unsustainable, and many clinics are already overstretched, with appointments routinely delayed or cancelled. In the UK today, around 20 people a month are going blind as a result of this appointment backlog.

This situation has been compounded by the COVID-19 pandemic, since the inability to sanitise equipment between use has led to all routine sight assessments being suspended in the UK. The long-term effects of this are unknown, but experts suggest that further increases in appointment delays and avoidable blindness appear inevitable.

Even if routine assessments are ever fully resumed, it is also thought that the current system of annual hospital visits is insufficient to track the most aggressive forms of glaucoma. Multiple studies have already suggested that more frequent (e.g., monthly) glaucoma eye tests could substantially improve clinical outcomes: allowing high risk patients to be treated sooner and more appropriately.

A new study from City, University of London adds to a body of evidence suggesting that the solution to all these problems may lie in home-monitoring.

The research involved 20 NHS glaucoma patients from across England and Wales who were provided with a prototype, tablet-based eye test (‘Eyecatcher’) for six months. Using the device, they were asked to run the home glaucoma eye test themselves, testing each of their eyes once a month. 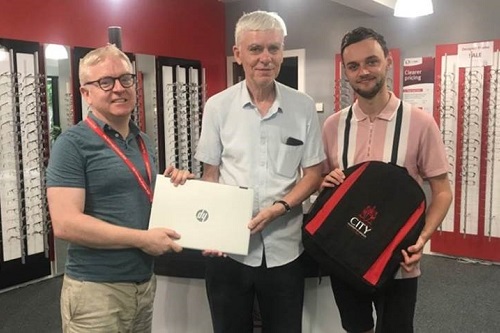 Similar to conventional eye tests for glaucoma, patients looked at a central cross presented on the device, and pressed a button when they saw a flash of light, which appeared at different locations and was of variable intensity. The computer’s front-facing camera also recorded them during the test, and artificial intelligence (AI) was used to perform facial recognition and head-/eye-tracking, to ensure people performed the test correctly.

Accuracy was assessed by comparing measurements made at home to conventional ‘gold standard’ assessments performed in clinic at both the start and end of the study. Adherence was quantified as the percentage of tests completed.

The study found that 98% of home tests were completed successfully (high adherence), and that the data from the home-monitoring tests were in strong agreement with the gold standard clinical assessments (high accuracy). 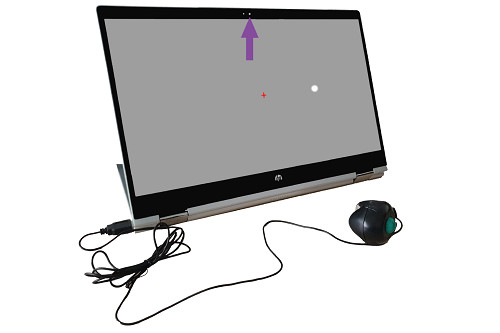 Image of the Eyecatcher glaucoma monitoring system, developed at City, University of London. The source code for Eyecatcher is freely available online.

The use of home-monitoring data was also shown to reduce measurement error when combined with current clinical data (by over 50% in 90% of eyes). This could potentially allow cases of rapid sight loss to be detected months or even years earlier.

This is the first study in the world that suggests glaucoma eye tests can be performed accurately at home by patients themselves. Future studies will examine  whether home-monitoring is sustainable over longer periods, and is capable of detecting rapidly progressing cases of glaucoma. The study authors are also preparing a follow-up study that will present the views and opinions of people with glaucoma, regarding home-monitoring.

Dr Pete Jones, first author of the study, and Lecturer at the Division of Optometry and Visual Sciences, City, University of London said:

This is tremendously exciting news. Effective home-monitoring would be a win-win-win for patients, clinicians, and the taxpayer alike, and it looks like the technology finally exists to make it a reality. This news is particularly timely, since home-monitoring is just one of the ways we can help make the NHS more resilient and sustainable, post-COVID.

The study was funded by Glaucoma UK, the College of Optometrists, and Fight for Sight UK, and is published in the American Journal of Ophthalmology.