As part of Linda's research on UK digital comics, she recently published a scholarly book review at The Comics Grid: Journal of Comics Scholarship, where the role of collected editions is critically examined, particularly regarding the need to embrace wider contexts, and thus to challenge and refresh traditional narratives. The review follows a line of enquiry that has been full of discoveries regarding the 'grand narratives' in comics studies.

In November last year Linda had the opportunity to visit the Library of Congress’s exhibition “Comic Art: 120 years of panels and pages“(LoC2019-2020) in Washington, D.C. For someone who had imbibed the traditional history and narratives of mass media comics, whether it be superheroes or cuddly animals, the LOC exhibition was more of a revelation than it should have been, as the mainstream narratives have, with exceptions, remained for the most part unchanged. Historically, comics that are more often cited might have had female or people of colour characters but have often been "monstrously represented" (Cambridge History of the Graphic Novel, Aldama 2018: 303). This exhibition showed another side of that narrative.

These were stories that became histories told by the dominant culture, reflecting that cultural gaze. The LoC exhibition showed that there are and have been other stories and histories, those of African-American comics creators for instance, such as Ollie Harrington (Dark Laughter 1935) and Jackie Ormes, considered the first African-American woman comic strip author (Dixie to Harlem 1937; figure 1). Jackie Ormes died in 1985; the first monograph on her work, by Nancy Goldstein, is from 2019. Linda is from the United States, and she was not only learning a new history of comics, but a new cultural history of her country. 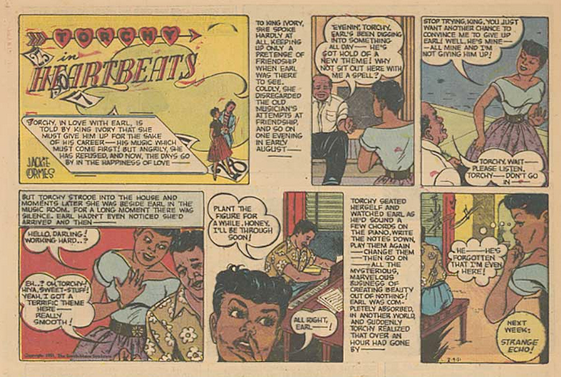 Towards the end of the last century, the 1990s were crucial for the emergence of an independent comics publishing industry, but the contribution of African-Americans continues to need greater recognition (Degand 2020). African-American creators also contributed to the blurring of boundaries between the mainstream and the 'alternative'. In 1993 a coalition of African-American [male] superhero comic book artists and writers, (Dwayne McDuffie, Denys Cowan, Michael Davis, and Derek T. Dingle) founded Milestone Comics, published and distributed through DC Comics, and would refocus the gaze. But these are stories that made it into the mainstream, examples with higher visibility and profile. It is the same thing we hear about women: because women do not appear in the grand mainstream narratives, it is as if women's creativity did not exist (“women never did [insert discipline or art here] before”].

So what about UK comics, what is the narrative for black British authors publishing in the UK? The anglophone comics studies 'canon', accelerated in the first 15 years of this century, has had relatively little room for black authors, and even fewer, if any at all, black British authors (see the table of contents of Chute 2014 as an example). Most of the literature on black comics is emphatically US-centric: Super Black. American Pop Culture and Black Superheroes (Nama 2011); Black Comics. Politics of Race and Representation (Howard and Jackson II, eds., 2013); The Blacker the Ink. Constructions of Black Identity in Comics and Sequential Art (Gateward and Jennings, eds., 2015); Black Women in Sequence. Re-inking Comics, Graphic Novels, and Anime (Whaley 2015); Encyclopedia of Black Comics (Howard, ed., 2017). It is notable these award-winning volumes are by African-American and women academics, but the gaze, and the focus, continues to fall on the better-known examples, and do not cover the work of UK-published comics per se.

This lack of visibility does not mean that there has not been a strong BAME presence in UK comics. Black British authors have also published in plain sight in the nation's preeminent comics weeklies: for instance, many a 2000AD reader will be familiar with the extensive work of Leicester-born multimodal artist and narrative designer Ajibayo Akinsiku (aka Siku). A now well-known example of black British comics is Skank Magazine (published by an imprint set up by Dotun Adebayo between April 1994 and March 1997), which featured Scotland Yardie, written by Bobby Joseph and drawn by Daniel Francis, Joseph Samuels and Michael Robinson. Joseph and Samuel's Scotland Yardie graphic novel (Knockabout, 2017; figure 2) has brought the Jamaican-British police officer to a whole new audience right in the midst of the Black Lives Matter movement. In October this year, Bobby Joseph gave a talk during the Lakes International Comic Art Festival on diversity and representation in UK comics, and can be seen here. 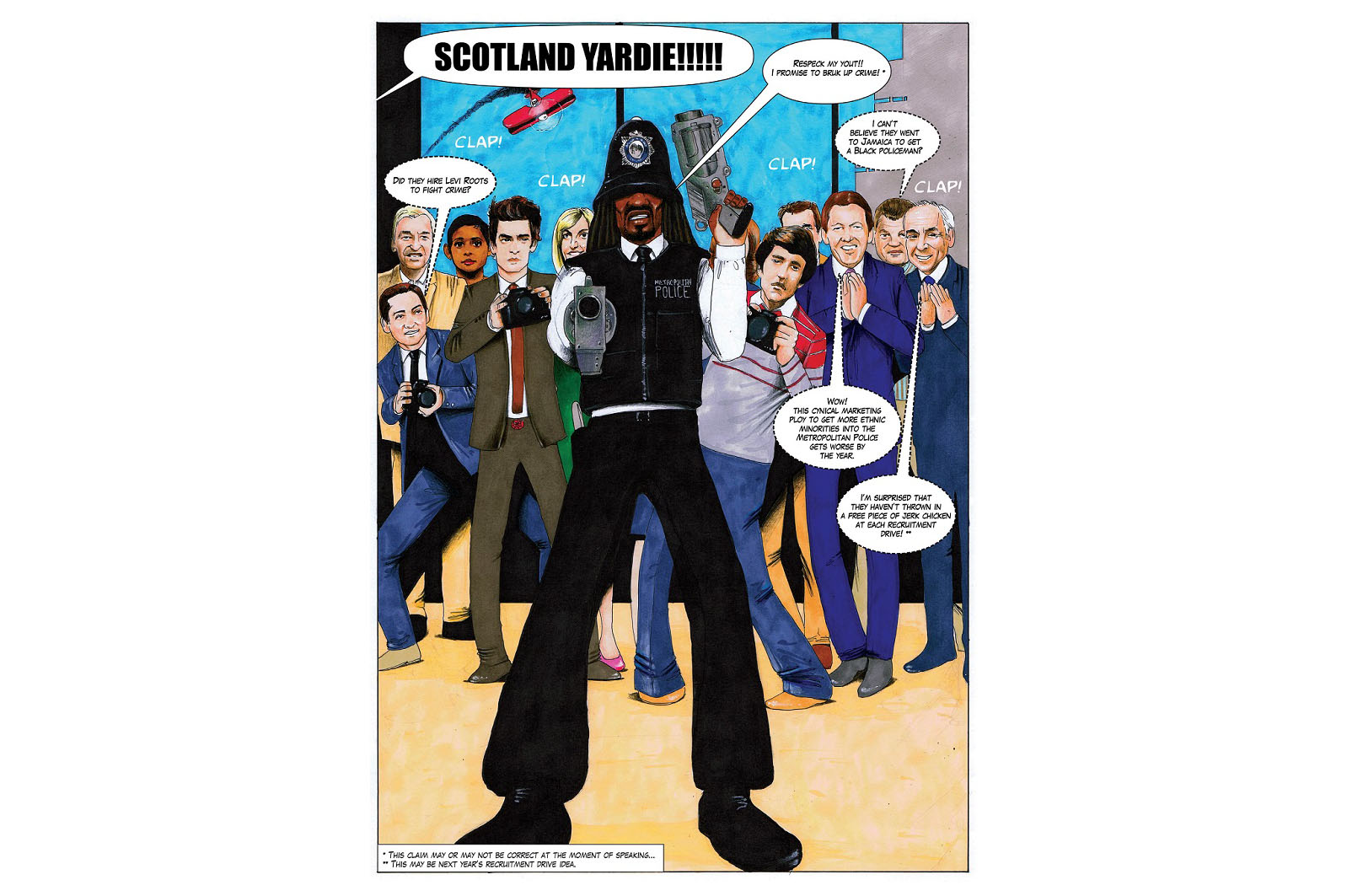 These pioneering black British comics were featured in the major British Library exhibition Comics Unmasked: Art and Anarchy in the UK (2 May – 19 August 2014). In a place of honour representing the innovative vibrancy of UK comics, the last piece in show at that record-breaking exhibition was Woodrow Phoenix’s She Lives, "perhaps the ultimate comic as art object, an unpublished, if not unpublishable one-metre-square gigantic book whose single copy can only exist in its original form as page after thick, crinkly page of inky black-and-white artwork" (Gravett 2014).

In the second decade of the 21st century, Black British authors continue to advance the forward-thinking, boundary-crossing nature of comics. The Clockwork Watch is a "collaborative transmedia storytelling project" centred around a series of comics by Yomi Ayeni and Corey Brotherson, with art by Jennie Gyllblad. The story is set around an alternate 'steampunk' Victorian London, offering an interesting discussion on the tensions between perceptions of  'steampunk' as a theme and anti-colonial writing (more here). 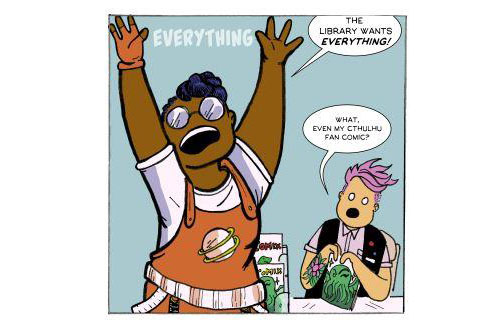 Figure 3. Panel from The Legal Deposit and You, by Olivia Hicks (British Library 2018). Reproduced with permission from the British Library.

Though male authors also appear to dominate the scene, a new generation of Black British women comics authors is actively contributing and interrogating the previous narratives through comics and scholarship (for example Hicks 2017 and 2018; figure 3).

We cannot help but wonder about earlier voices in the UK and yes, throughout the Commonwealth which might correct the UK comics gaze. Our own research is not in this area, but we would like to see these stories, histories make their way into the grand historical narrative.

The "graphic novel" has made comics respectable in a way: higher visibility, higher profile in the academic and commercial worlds. But have all comics boats and passengers been lifted? With this higher profile another look at those grand comics narratives is necessary, one that truly reflects the diversity and complexity of comics, as they refocus their cultural gaze.

Dr Ernesto Priego is a lecturer and researcher at the Centre for Human-Computer Interaction Design, and the founder and editor-in-chief of The Comics Grid: Journal of Comics Scholarship.

Linda Berube is a second-year PhD student at the Centre for Human-Computer Interaction Design. Linda's PhD research is funded by the Arts and Humanities Research Council’s Collaborative Doctoral Partnerships Programme, working with City HCID in partnership with the British Library (BL). The supervision team includes Dr Ernesto Priego and Dr Stephann Makri at City, and Ian Cooke and Stella Wisdom at the BL.

Skank and 2000AD are both collected by The British Library.

With gratitude to Ian Cooke.