A graduate of City’s Postgraduate Diploma in Paediatric Nursing programme, Ana Waddington was last month named nurse of the year by the RCNi for her work teaching young people lifesaving skills.

In October, Ana was named the Royal College of Nurses RCNi Nurse of the Year 2020 for her work on YourStance, for which she worked extra shifts and used her own savings to establish. She was also won the RCNi Innovations in your speciality award for this work. 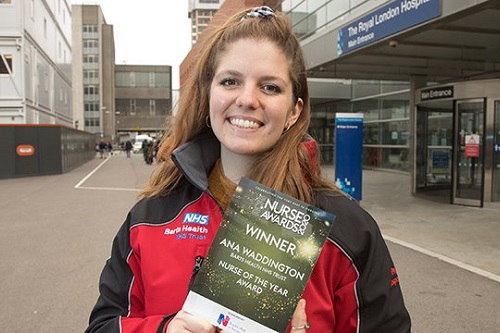 Ana started YourStance with two other volunteers back in 2018, taking a manikin to Feltham Young Offenders Institution as part of work with social business, Catch22. However, YourStance is now a community interest company, and has grown to include 150 volunteers, including nurses, doctors and paramedics whom Ana co-ordinates in her spare time. YourStance has reached 480 at-risk youngsters in prisons, pupil referral units and in east London communities in the last two years.

Speaking about YourStance to the Evening Standard, she said:

Ana originally studied for a Bachelor of Arts degree in History at the School of Oriental and African Studies (SOAS), University of London.

However, she decided to continue her studies here at City, University of London with a Postgraduate Diploma in Paediatric Nursing (2015), and from which she embarked on her career.

Reflecting on the trajectory of her education, Ana told the School:

“My time at SOAS has been extremely valuable throughout my career journey. Studying the history and politics of the Middle East forced me to recognise the inequalities and injustices in the world, stimulating a desire to find a skill that would help to address these in some way.

I am thankful to City, University of London for providing me with the vocational skills that would later on lead me to the creation of this project. Sharing such skills through this project has been key to empowering young people who have been let down in some way by society. Running these workshops, and the benefit it has to both those we teach and the volunteers who teach the skills, only makes us want to do more.

Commenting on Ana being named RCNi Nurse of the Year, Professor Debra Salmon, Dean of the School of Health Sciences said:

“Ana’s award is a testament to her passion, empathy and hard work.  She has made a real and significant difference to the lives of so many people – not least the local communities and young people she and her team of volunteers work alongside.

"We are extremely proud of her, and of the fact the School of Health Sciences at City has had the privilege of being a part of her career journey.”

Visit the Division of Nursing, City, University of London webpage.