Rohit Sagoo, Lecturer in Children’s Nursing at City, has been recognised with a Points of Light award from the UK Prime Minister for his outstanding volunteering with ‘British Sikh Nurses.

The daily Point of Light award recognises outstanding individual volunteers in the UK who are making a change in their community.
On the 30th October, Rohit Sahoo, Lecturer in Children’s Nursing at the School of Health Sciences, City, University of London, was recognised with the award by the Prime Minister, Boris Johnson.

Shared on the Points of Light website from a personal letter to Rohit, the Prime Minister said:

“Congratulations on the success of ‘British Sikh Nurses’ and your extraordinary effort to encourage thousands of new stem cell donors.

At a time when our NHS faces enormous pressures, you are engaging your members to look after their physical and mental wellbeing. You have also fantastically supported the NHS with initiatives to increase stem cell donors and organ donors.

Commenting on the award, Rohit said:

Rohit joined the Division of Nursing at City, University of London earlier this year as Lecturer in Children’s Nursing. He was previously a Senior Lecturer at Anglia Ruskin University.

As well as becoming the first British-born, Asian male children's nurse in the UK, during the late 90's, Rohit more recently went on to found the British Sikh Nurses initiative in April, 2015.

The mission of  British Sikh Nurses is to help raise awareness of physical and mental health issues, and provide education about maintaining wellbeing and healthy lifestyle choices within the Sikh community, wider BAME communities, and beyond.

Since its inception, British Sikh Nurses has delivered on a range of community work and projects in both India and the United Kingdom. Rohit has carried out projects in collaboration with the Department of Health and Social Care as well as participating in working with the Sikh Community on issues around mental health, organ donation, gender and abuse and the impact of diabetes. 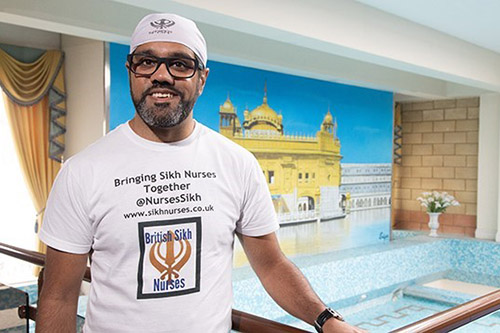 With the Department of Health and Social Care, he has highlighted issues around organ donation, mental health and the impact of diabetes in the British Asian Community.  His work with blood cancer charity DKMS on donor drives across the UK has increased stem cell donors from Asian communities by about 10,000 registrants. He has registered approximately 1,200, with three patients receiving a stem cell donor.

Often working alone, in his own time, Rohit has also engaged local Gurdwaras (meeting places for congregational worship) in London to support and create awareness to individuals from BAME (British Asian Minority Ethnic) backgrounds on the positive aspects of their health and wellbeing, such as monitoring blood glucose and blood pressure levels and giving health advice thereafter.

In 2019, Rohit was a finalist for the Community and General Practice Nursing Award from the Royal College of Nursing. He often appears in the media, both within the British Asian community and nationally, to talk about health issues affecting both the Sikh and wider BAME communities.

Visit the Division of Nursing at City, University of London webpage.