BBC Newsnight Editor Esme Wren and Deputy Leader of the Labour Party Angela Rayner were among an impressive roster of guests that spoke to City, University of London students during an intensive five-day political journalism course.

There were also talks from David Holdstock, Director of Communications at the Local Government Association, about local government, as well as esteemed political documentary maker Michael Cockerell, who ran through clips of some of his award-winning films and provided candid insights. 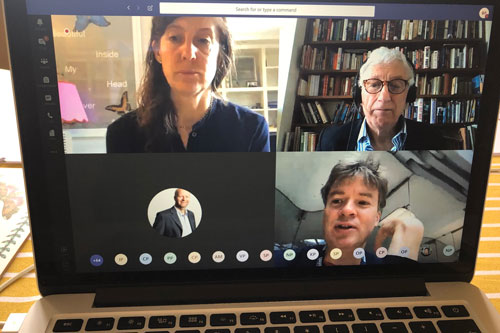 The Political Headlines course is a key part of the MA journalism programme. It runs twice a year, led by Barney Jones, the former editor of Breakfast With Frost and The Andrew Marr Show, now a visiting professor in the Department of Journalism at City.

Normally the course takes place on campus at City, with a full day at Westminster in the middle of the course. On this occasion, however, the Covid-19 lockdown dictated that the course be studied remotely. 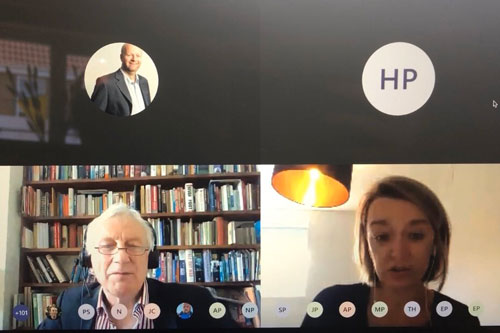 However, the week’s sessions were deemed an enormous success and a fantastic example of how a busy journalism department can maintain business-as-usual teaching during a pandemic.

Dr Paul Lashmar, the head of the Department of Journalism, who sat in on some of the sessions, said:

This is an example of what’s possible in terms of how successfully we can use online technology to deliver excellence in our teaching – indeed the success of Political Headlines last week shows that we are already using technology highly effectively.

The students greatly enjoyed the week-long course and the incredible array of insights they were able to benefit from, with many saying it had given them a real lift after many weeks on lockdown at home.

The BBC's Chris Mason tells Barney Jones that trying to speak to people who are disengaged in politics is at the heart of everything he does.

“This week we've heard from some of the brightest political minds in the country.

“A real highlight for me was asking Esme Wren about the Prince Andrew interview going viral last year.

“And, of course, the moment Labour Party Leader Sir Keir Starmer photobombed Angela Rayner while she was speaking to us [see image above headline], mere moments after he’d been questioning the Prime Minister in the Commons."

I'm incredibly grateful to Barney Jones for arranging such an informative week and to all of the guest speakers for answering our questions and being so generous with their time.

Commenting at the end of the week, Professor Barney Jones said:

"I was really glad we were able to get so many students to speak directly to our star guests. Around 50 different students were able to pose questions directly to a range of top figures from Westminster, both politicians and journalists.

"When all the normal routes of reaching people have been closed down during the health emergency, this was a special opportunity for the students which they relished, raising probing and insightful issues."

"It's why I'm happy to come back each year for Barney's course – City has such bright students. It's an energising and instructive process from my side too!"

Another highpoint for the students was being able to quiz the presenter and editor of BBC Radio 4's Broadcasting House within minutes of the programme coming off air on Sunday morning.

"Presenter Paddy O'Connell was remarkably frank about his tussle with the Labour Party machine," said Jones.

"Apparently they forbade an MP who was happy to come on from appearing because they wanted a particular shadow minister on the airwaves. Result: no Labour voice."

Kate McCann, Sky News: "The government’s messaging has been really confusing. For example, Boris Johnson and Matt Hancock conflicting each other about a possible vaccine. I’ve been bombarded with people accusing me of hating Boris and loving Labour. I’d merely pointed out that things two people had said didn’t make sense. The information I’m putting out there is just bringing me negativity. Journalists tweeted me saying they’d muted all notifications, while others have stopped tweeting because they can’t deal with the hate. I treat Twitter in the same way I would a TV broadcast. I don’t tweet personal opinions. You shouldn’t be able to tell what I actually think about anything; that’s really important to me."

On how to approach big interviews…

Esme Wren: "There will never be any agreement behind the scenes about how we’ll do an interview. I always say that we’ll be fair. We’ll always have 2-3 questions we need to have answers in a 10-minute interview slot, so any politician will be aware that it’ll probably be the most robust test they’ve had that day. And we will say on air when we’ve approached an MP and been turned down. That will put pressure on the government."

On the current Prime Minister…

Nick Watt, Newsnight Political Editor: “The problem for journalists is that Boris Johnson made his name through the media, and knows how effective – or how dangerous – it can be for a government.”

How to reach those who feel removed from politics…

Chris Mason, BBC Political Correspondent: “That is the essence of what I try and do in all broadcasting. People tend to equate the serious and the formal. In my experience you can be serious – and be proudly nerd – but also be a three-dimensional human being."

On government messaging during coronavirus…

Esme Wren, Newsnight Editor: "It’s clear the government are not managing their message brilliantly at the moment. It can raise more questions than answers. Now that we have a more effective opposition (now that the leadership campaign is over), that will start to smoke the government out."

Kate McCann: "I can’t tell you how many times I’ve got a story by being in the right place at the right time. Bumping into people into corridors… so much of it is fluke!"

On covering a pandemic…

Esme Wren: "I’ve never experienced anything like this. Things like Brexit were tough, with issues around BBC impartiality. But this is different. People are losing their lives. It’s important to get the tone right. You have to give the government benefit of the doubt and allow them to get their message across, but as they start to get data and a better understanding, accountability has to kick in. Politically it has been incredibly toxic and tough."