Professor Jane Singer from City, University of London’s Department of Journalism, has been appointed as a Specialist Adviser by the House of Lords Select Committee on Communications and Digital for its inquiry into the future of journalism. 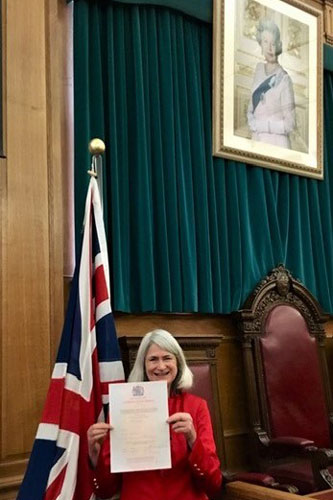 The Committee – featuring 13 cross-party Members of the House of Lords, as well as a Policy Analyst and other staff – conducts inquiries into selected topics approximately twice a year. For each topic, they appoint a Specialist Adviser, typically an academic with wide-ranging expertise in that topic.

The ’SpAd’ works closely with the Policy Analyst, filling a role that encompasses providing background information and recommended readings to the committee, suggesting experts to invite to give testimony, and contributing to the final report at the end of the inquiry.

The Department of Journalism is delighted that on this occasion Professor Singer is their chosen expert.

Reacting to her appointment, Professor Singer, who is Professor of Journalism Innovation at City, said: “This is a fantastic opportunity to be part of an inquiry that we hope will have a positive industry impact.

“I’m very honoured by the appointment, which started just a couple of weeks after I became a naturalised British citizen! [pictured]."

"I’m delighted not only to be of service but also to read and hear testimony from some of the most forward-thinking people in journalism.”

Professor Singer’s Department of Journalism colleague Dr James Rodgers said: “It’s so good that Jane’s expertise has been recognised in this way.

“It comes as no surprise to those of us who work with her that her advice should be so valued. We have valued it for years,” he said.

The future of journalism

Digital technologies have called into question what journalism is, in a society in which journalistic content takes an ever-wider range of forms and in which it is easier than ever for citizens to do many of the same things that journalists do.

Professor Singer will assist this inquiry as it investigates changes in the production and consumption of journalism, how journalists can be supported to adapt to those changes, and how the profession can become more trusted by – and representative of – the general population.

After gathering evidence and discussing it, the Committee will generate a report and frame recommendations stemming from the inquiry. When complete, this document goes to the Government.

In a statement outlining the scope of the inquiry, Lord Gilbert of Panteg, Chairman of the Committee, said:

“In our democracy, journalism is at the core. But in recent years we have seen a shift from the traditional consumption of news and away from established business models.

“We now have access to news on multiple platforms and no longer need to wait for the morning paper or the evening news for updates.

For the 70,000 people across the UK who are employed as journalists, the shift from traditional print and broadcast media to digital has led to a need for increased training and a wider range of skills.

“Public trust in journalists has fallen and is particularly low outside of London and other metropolitan hubs,” Lord Gilbert said. “This may be connected to the profession not being representative of the population it is serving.”

“We first thought we would focus on the changes brought about by digital technology, but when the committee started digging into the issues, everyone realised the challenges to the industry are far more complex,” Professor Singer said.

“We’re all learning so much from the experts who have shared their insights about everything from media literacy to newsroom diversity to opportunities to strengthen local journalism. I hope that in at least some small way, we can help British news outlets be stronger, better and more secure in the ability to provide their vital service to the public.

“But we haven’t abandoned our interest in technological change, either! I’m keeping a list of all the brilliant potential visitors to my Journalism Innovation class next year.

"I can’t wait to get these smart people in front of City students to share their insights and experiences!”

About the House of Lords Select Committee on Communications and Digital

The Committee investigates public policy areas related to the media, digital, communications and the creative industries. The Committee decides itself which subjects to investigate and takes both written evidence and oral evidence in public from individuals, academics, businesses, think-tanks and government ministers in order to gather material before then producing a report.

Members of the public can watch and listen to testimony via Parliament TV , either live online or via archived footage.

The Government have undertaken to respond to reports from the Committee within two months of publication. A debate in the Chamber of the House of Lords usually follows.

Get updates about the Committee’s work.