The award-winning broadcaster, political editor and financial journalist Robert Peston has given the 2020 Hugh Cudlipp Lecture at City, University of London.

Partnered by the London Press Club and sponsored by the Daily Mirror, the event was titled ‘Can impartial news survive?’

In a speech that was liberally sprinkled with newsworthy anecdotes, Peston managed to inspire an assortment of news headlines in the days that followed.

Listen to the podcast of Robert Peston's 2020 Hugh Cudlipp Lecture

On the subject of financial journalism, he spoke of his early career, in the process laying bare how much the industry has changed.

“All serious business and financial journalists abjure direct investing,” he said. “But it wasn’t always so. When I was a cub reporter in the 1980s, the Daily Mail tried to recruit me.

“One of the perks of the job they offered was that they had close relationships with stockbroking firms who gave the Mail hacks privileged access to offerings and placings of new shares at the discounted flotation price – a reward for bullish coverage.

“I made my excuses and left, as they say. But that kind of incestuous relationship between hacks, brokers and bankers was rife at the time, and – thank goodness – has largely been swept away.”

Other stories generated by his speech included:

“Here is the painful paradox,” said Peston in his closing remarks. “In the era of [Lord] Cudlipp’s and the Mirror’s pomp, when media owners and prime ministers colluded in cover-ups, public respect for the institutions that underpin our freedoms and way of life was strong.

“Unless we abandon democracy and adopt Chinese-style controls on what can be said on social media – and I am not suggesting that – we need news organisations whose primary function is to shine the brightest light on big government and big business, such that the rogues who are always drawn to power cannot misbehave with impunity.”

The annual Cudlipp Lecture was created and named in memory of the late Lord Cudlipp, the former editorial director of the Daily Mirror and one of the pioneers of 20th century popular tabloid journalism.

The lecture gives a platform for a high-profile media professional to address key developments and issues in today’s news business. 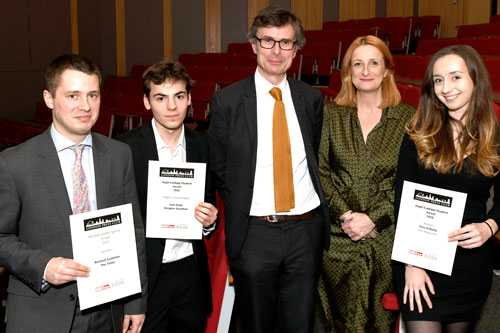 The winner of the £1,000 Hugh Cudlipp Award for Student Journalism, sponsored by the Daily Mirror, was also announced on the night.

The Hugh Cudlipp Award is given to a student who has made an outstanding contribution to journalism for an article, or series of articles, or video, exploring an issue of public interest or concern which, in the Cudlipp tradition, exemplifies lucid and graphic communication to a wide audience.

The Award was won by Tara O'Reilly for her report on sexual misconduct at Westminster, which was published in Elle magazine.

The judges said her report had “depth and structure, with personal experience, good observation plus several interviews. It’s a real piece of journalism.”

Also awarded was recent City MA Newspaper Journalism graduate Richard Assheton, who won the Richard Lindley Award for his report in The Times about detention centres in India.

The hashtag #CudlippLecture features various observations from those in attendance for Robert Peston’s speech.