On University Mental Health Day, City, University of London has pledged to take part in Row Britannia – a nationwide challenge to support student mental health, fitness and wellbeing, and fundraise for Sport Relief

Row Britannia is an inclusive mental health, fitness and wellbeing challenge run by The British Inspiration Trust (BRIT), for teams throughout the UK to raise vital funds and awareness of support services available to students.

The challenge has been set up in collaboration with a range of partner organisations, including student mental health charity Student Minds and PAPYRUS, the national charity dedicated to the prevention of young suicide.

The challenge consists of two specific targets, which City will aim to reach by Saturday 6th June 2020: a cumulative rowing challenge of 2020 miles, and a fundraising target of £3,000 for Sport Relief. 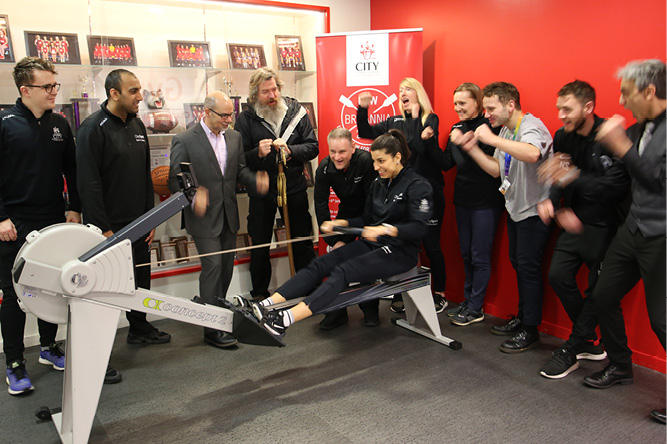 BRIT Founder Phil Packer, a charity activist who suffered serious injuries while serving with the British military in Iraq in 2008, visited CitySport for the launch. Phil said:

In its simplest form Row Britannia is a rowing event – but actually it’s about much more than that. The challenge is about coming together for student mental health.

It’s about suicide prevention, reducing isolation and helping to combat loneliness at university. But at the same time, it’s ultimately about having fun, and these things don't often come together in the same paradox.

Get involved at City

City would like to encourage anyone to join in the challenge, raise money for Sport Relief and improve fitness and wellbeing along the way.

As a staff member or student at City, you can contribute to City’s collective team effort to row the full challenge distance and raise funds for Sport Relief. A rowing machine will be relocated to different locations across campus between now and June, to encourage more people to take part.

A City, University of London JustGiving page has been set up. Students, staff and members of the public can sign up to the page individually and be part of City’s overall team effort to raise the £3,000 fundraising target.

If you would like further information about Row Britannia or how to get involved in City's team effort, contact Bill Thompson, Head of Sport and Leisure Services at City.