Mr Michael Cole-Fontayn was awarded the Honorary Degree of Doctor of Science (Honoris Causa) at the Cass Business School graduation ceremony at the Barbican on Monday 20th January.  Mr Cole-Fontayn delivered an oration on the topic of Purpose in and of Financial Services. 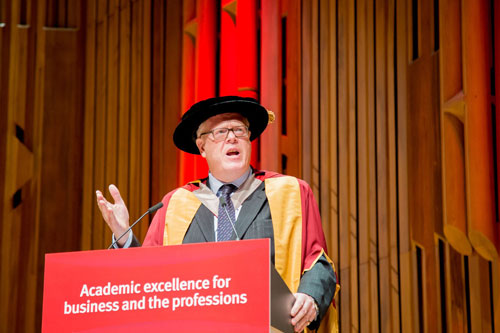 Those nominated for honorary doctorates have achieved high professional or academic distinction in their fields and are considered outstanding role models for our students.

Mr Cole-Fontayn has made a significant and lasting contribution to higher education and the City of London through his role as Chairman, Association for Financial Markets in Europe - the industry organisation which represents its financial services membership as the voice of Europe’s wholesale financial markets.

In addition to his role at the Association, he is Chair of the Chartered Institute for Securities and Investment (CISI), as well as a member of the advisory council for TheCityUK, the FICC Markets Standards Board, the British American Business International Advisory Board and the Official Monetary and Financial Institutions Forum Advisory Board. He is also a Board and Executive Committee Member of the Global Financial Markets Association.

“Michael is a wonderful friend and supporter of Cass and made a great contribution to the School with his role on the Business School Advisory Board between 2012 and 2016.  He has demonstrated outstanding leadership throughout his career and we are very pleased that he is here today to accept this award.”

Mr Cole-Fontayn said he was delighted to accept the award.

“This is an enormous honour. I am humbled to be recognised by City, University of London for both my financial career and my support for inclusion and development of diverse talent in Financial Services and the City.”

He joined BNY Mellon in 1982, starting initially as a credit and risk analyst and subsequently serving as a banker in various regions around the world including in Asia.  Mr Cole-Fontayn served on the BNYMellon Executive Committee and was BNY Mellon’s EMEA Chairman between 2011 and 2017.

Mr Cole-Fontayn serves as a Patron for Women in Banking and Finance, and the City Veteran’s Network.  He mentors and coaches widely in financial services and was 30% Club Mentor of the Year in 2017.  He is on the Court of The Merchant Taylors Livery Company, a Trustee of the mental health charity the Charlie Waller Trust, an Advisory Board Member of the City Mental Health Alliance, and Director of Ranmore Strategic Advisory.