The CEO of global electrical engineering company, Megger, has been recognised for his outstanding contribution to engineering and education.
First published Tuesday, 28th January, 2020 • by John Stevenson (Senior Communications Officer) 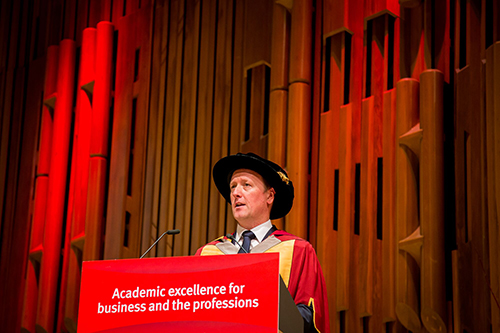 Those nominated for City, University of London's Honorary Doctorates have achieved high professional or academic distinction in their fields, and are considered outstanding role models for City's students.

Mr Fairbairn, awarded an Honorary Doctorate in recognition of his outstanding contribution to engineering and education, has been the Chief Executive Officer of the Kent-based Megger Group, since 2017.

He has been responsible for a €270m global electrical engineering organisation trading in over 100 countries of the world.

Mr Fairbairn has collaborated closely with City, University of London, for over a decade, primarily with its Centre for Compressor Technology, and, latterly, with other research projects within the Department of Mechanical Engineering & Aeronautics.

In 2013 he was appointed a Fellow of the Royal Academy of Engineering, in recognition of his role in engineering innovation.

From a young age, he aspired to follow in his father’s footsteps as an engineer due to his interest in space, and a curiosity to travel the world.

Mr Fairbairn left school at 16 to complete an engineering apprenticeship before going onto university as a mature student and gaining a first-class honours degree in Mechanical Engineering in 1992 from the University of Strathclyde. In 1995, at 26, he became one of the youngest ever UK Chartered Engineers.

In preparation for his goal to transition into general management and run a global business, Mr Fairbairn gained an MBA from Loughborough University in 2002. This and the study of leadership helped set him on a steep management responsibility trajectory culminating in his current CEO role.

He offered the following words of advice to SMCSE and School of Health Sciences (SHS) graduands:

Find a mentor and find a new one when you outgrow them. Study the attributes and approach of the best people in your chosen career path – find out what excellence looks like and copy it. Anything is possible; the world is a small place.

In 2001 he was asked to chair the Glasgow Employer Coalition, a voluntary organisation set up by the UK Government, which provided ‘seed money’ to innovative programmes that helped take individuals from long term unemployment to sustainable work. Over a 7-year period Mr Fairbairn helped over 2,000 people in Glasgow move into employment. He was awarded an OBE in 2007 for his leadership of the organisation.

Mr Fairbairn is inspired by helping young people improve their career and life chances and has sponsored events, development and experiential opportunities for the youth of Glasgow.

In 2017 he was appointed as a Fellow of the Royal Society of Edinburgh.