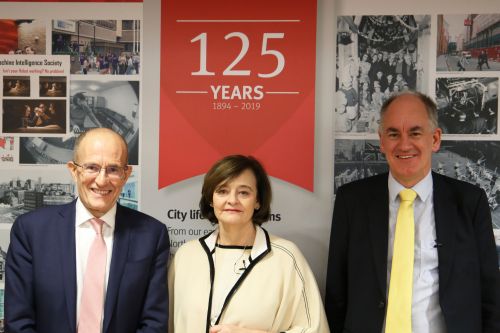 Cherie Blair CBE QC, was the featured speaker at the City 125th Anniversary Event, hosted by The City Law School on February 11th 2020.

Dean of the City Law School, Professor Andrew Stockley, chaired the event which took the form of a Q&A session in the Oliver Thompson Lecture Theatre, between Professor Stockley and the founder of the Cherie Blair Foundation for Women. 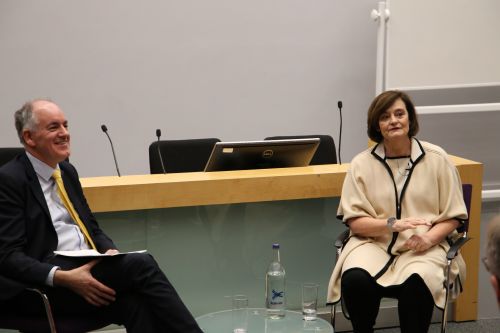 Mrs Blair responded to questions covering a variety of topics, including her childhood influences growing up in a female-headed, working-class home near Liverpool; her motivations for becoming a lawyer; how she met her future husband; her experiences getting tenancy in barrister's chambers as a young woman; how she become a tech-savvy lawyer; the challenges of maintaining a substantial independent career as a Prime Minister’s wife; and her thoughts on a raft of weighty constitutional changes ushered in by the Tony Blair government.

Acknowledging the determination of her mother and paternal grandmother in ensuring that she received a grammar school education, the young Cherie Blair said she was influenced by Dame Rose Heilbron of Liverpool - the first of two women to be appointed King's Counsel in England, the first woman to lead in a murder case, the first woman recorder, and the first woman judge to sit at the Old Bailey. 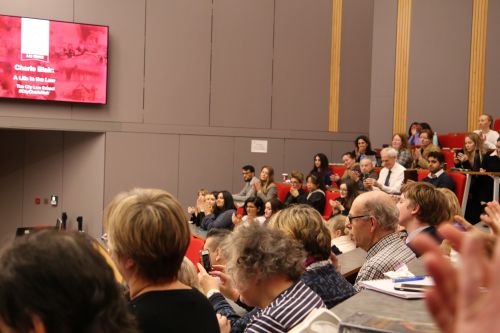 She read law at the London School of Economics on a full grant, graduating with First-Class Honours.

Later she was enrolled at the College of Law and passed her Bar Vocational Course coming top of her year in the bar exams, while teaching law at the Polytechnic of Central London (University of Westminster). She was the Labour candidate for the North Thanet seat in Kent in the 1983 general election, losing to Roger Gale.

Mrs Blair took silk In 1995, and, in 2000, became the founding member of Matrix Chambers, a ground-breaking legal practice designed to reduce the barriers between providers of legal services.

Mrs Blair has actively campaigned for human rights and equality for women.

She is closely involved with a number of charities around the world with a special emphasis on those working with women, children and the transformative power of education. In 2008, she established the Cherie Blair Foundation for Women, which partners with global organizations to support women entrepreneurs in the developing world.

An avid embracer of new technology, she said:

I have always been passionate about the way technology can allow people to do what they otherwise would not be able to do. I discovered that technology was incredibly useful in my work as a self-employed barrister. Technology enabled me to do my own typing and set up templates. I established the Cherie Blair Foundation to help women entrepreneurs such as women barristers to be assisted to use technology.

Mrs Blair left the students in her attentive audience with the following advice: “Have confidence in yourself. If opportunity comes your way, seize it”

You can listen here to the complete event.