Speech Sounds in the World’s Languages

Johan Verhoeven is Professor of Experimental Phonetics at City, University of London. On Tuesday 4th February 2020, he delivered his inaugural lecture entitled, ‘The Articulatory Possibilities of Humankind: Speech Sounds in the World’s Languages’, to an audience of academics, students, members of the public and friends; all sharing a common interest in his wide-ranging and comprehensive work to date in the field of phonetics (the study of human speech sounds).

Professor Debra Salmon, Dean of the School of Health Sciences, introduced Professor Verhoeven and his lecture, part of the SHS Dean's Lecture Series, citing his international reputation for research excellence.

Professor Verhoeven began his lecture by providing insight into the enormous complexity of the speech production process, which involves the smooth co-ordination of about 160 muscles which are activated at a rate of approximately 1,400 neural commands from the brain per second. 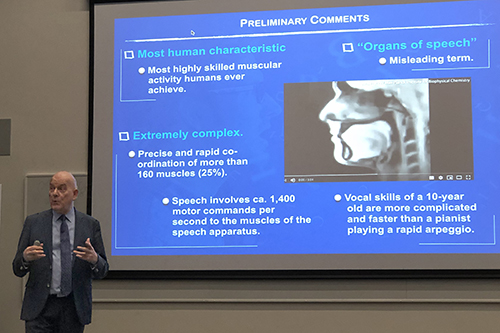 He gave a practical demonstration of how speech sounds are produced by modelling the vocal tract with a transparent plastic tube and the voice box by means of an electrolarynx. By changing the width of the tube he illustrated that clear sound differences can be achieved. 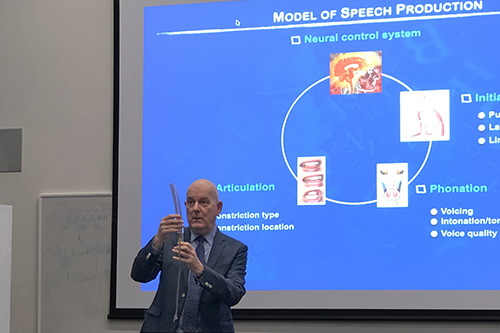 He also demonstrated the striking effect that different modes of vocal vibration in the larynx have on creating the impression of very different personalities.

Professor Verhoeven also explored the category of speech sounds known as ‘clicks’ which are made via a ‘lingual ingressive’ airstream mechanism, produced by the closing of the vocal tract at two places of articulation in the mouth.

These are only used linguistically in the Khoisan group of languages in Southern Africa. Speakers of other languages in the world often use clicks too, but not in a linguistic capacity.

However, he hypothesized that languages like English may start using these sounds too in a not-so-distant future.

To illustrate how the tongue of the speaker creates the clicks he shared an X-ray video of a native Zulu speaker pronouncing a short sentence with many click sounds. The video can be watched below:

Diversity of language sounds across the world

To illustrate the diversity of human speech sounds (phonemes) across the world, Professor Verhoeven relied on some key figures from Phoible, a database of 2,186 languages (31% of all known spoken languages) containing, in total, 3,183 phonetically distinct speech sounds.

On the basis of this database he discussed the distribution of vowels and consonants in the languages of the world.

The language with the largest number of phonemes (158) is !Xóo (or ‘taa’), spoken by people on the border between Botswana and Namibia.

The smallest number of phonemes is 11 in languages like Rotokas, which is spoken by about 4,500 people on the island of Bougainville in Papua New Guinea.

He considered this range quite large, bearing in mind that English has about 46 phonemes (depending on the accent of English).

He also shared a study suggesting that the further from Africa languages are spoken the less phonemes they have. 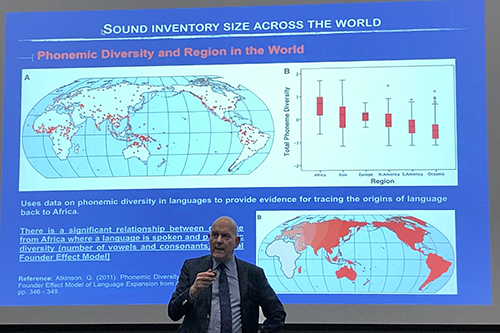 The English language has 12 vowels

Professor Verhoeven also demonstrated how vowel sounds are articulated, and provided comparative figures for how many vowels are used in spoken languages.

For example, Greenlandic has three, Swahili and Spanish have five, Italian has seven, and Received Pronunciation (RP) English has 12 vowels. The  sound qualities of these vowels contrast with one another so strongly that they create the maximal perceptual difference possible to a listener.

I was delighted with the engagement and thought-provoking questions I received from the audience, on topics like accent variation in the school playground, the effects of language contact, indicators of personality and emotion in speech and the relationship between language and identity

"I would like  to thank Jo for his outstanding talk, which showcased the extensive range of his expertise, and demonstrated his ability to effectively communicate the subtleties of his work in phonetics to a lay audience.” 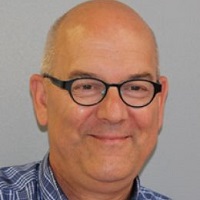 Johan Verhoeven is Professor in Phonetics at the Division of Language and Communication Science. He joined City, University of London in 2006 and he is a specialist in acoustic phonetics and the phonetic description of motor speech disorders.

Find out more about the Division of Language and Communication Sciences at City, visit the webpage and follow the division on Twitter @CityLCS.