The Member of Parliament for Tottenham delivers a wide-ranging, intelligent and emotive speech on universities’ role in society

City, University of London’s School of Arts & Social Sciences was delighted to welcome the Rt Hon David Lammy MP to give its 125th Anniversary Lecture.

Mr Lammy gave a powerful and moving address to over 300 City staff, students and members of the public. 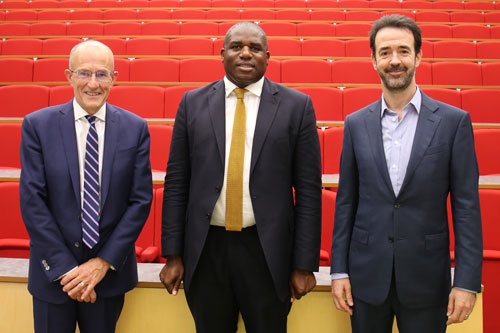 In a speech focused on how universities can bring a divided society together, the Tottenham MP earned several spontaneous rounds of applause for the way he combined a forensic analysis of the problems facing British society with a heartfelt desire for institutional reform.

He urged Higher Education institutions to do more for students from less privileged backgrounds and discussed his work around Windrush and Brexit.

The Anniversary lecture, which was chaired by Professor Chris Greer, Dean of The School of Arts & Social Sciences, marks the 125 years since a foundation stone was laid to start construction of the Northampton Institute in 1894.

Inequalities in the system

Mr Lammy used his speech to lay bare the scale of societal inequalities experienced in the UK, where young people who are working class, an ethnic minority, or from certain parts of the country are at a distinct disadvantage from those born into more privileged circumstances.

“Private schools account for 7 per cent of the population, but 40 per cent of those who went to Oxbridge universities in 2017,” he said.

“The London boroughs of Richmond and Barnet have more entries to the colleges at those universities than the entirety of Sheffield, Manchester, Birmingham and Leeds combined.

“Just one London borough has more [entries] than the entirety of Wales. So, the inequality is not just an ethnic inequality, but also a regional inequality and absolutely a class inequality.

“This cuts to heart of the kind of society that we are. We still have yet to make the profound changes that might affect that.”

This was one of the best lectures I have ever sat in. I left speechless. https://t.co/3WvapaOArx

A tweet from a City student after Mr Lammy's talk

Mr Lammy went on to note that only one in four Cambridge colleges made offers to black British students in every year between 2010 and 2015.

By way of contrast, he spoke of how multicultural the student populace was when he studied at Harvard University in the US, where due to firm policies and affirmative action there is much greater diversity.

“In Britain, there are more offers made to students from one school – Eton – than those on free school meals across the whole country. That’s a real problem,” he said.

Mr Lammy also stressed that, while the problem of getting people from less privileged backgrounds into university is a popular topic for the British media, more vocational qualifications struggle for column inches.

“The status of vocational learning in Britain is poor,” he said. “This is not the best country in the world to develop technical skills.”

“This is not Germany, Australia, Finland or Japan, which have much better vocational systems. [A lack of] that technical level of skills might suggest that the decision to move away from polytechnics was, in fact, a mistake.

“There is a presumption that academic is preferable. We need to break that open and make that bold step. It’s only when middle-class families are comfortable with this that we’ll know we’re there.”

Mr Lammy went on to applaud the Labour Party’s recent commitment at its recent Annual Conference for universities to face quotas on the number of privately educated students they can admit.

“It’s one of the boldest policies I’ve seen in 20 years as an MP,” he said. “It cuts to the heart of the divide in this country.” 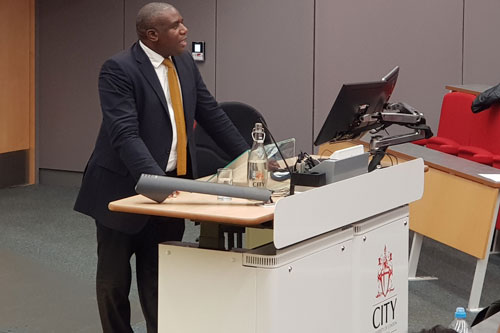 David Lammy MP during his 125th Anniversary Lecture at City, University of London

At the end of his speech, Mr Lammy took time to answer a wide range of questions from students, staff and members of the public, on topics ranging from media diversity and white privilege, to Universal Basic Income and dealing with abuse on social media.

To find out more about City's 125th Anniversary and the activities that have been taking place to mark this milestone year, visit the City 125 website.