Yasmin Alibhai-Brown, Peter Hitchens and Andrew Doyle all contribute to discussion on whether political correctness conflicts with the notion of free speech

Do words have consequences? Should Boris Johnson moderate his language to avoid fuelling social and political divisions? At what point does free speech become hate speech?

These were some of the questions that exercised the panel and a packed audience at a City, University of London Department of Journalism discussion titled ‘What’s wrong with political correctness?” on the evening of Tuesday 8th October 2019.

Space was at a premium for such high-profile panellists, with those guests who weren't able to find a seat congregating at the back of the lecture theatre on their feet.

The Department’s Dr Mark Honigsbaum chaired the debate, posing questions that were always likely to polarise panellists with such diverse standpoints.

Quoting Coriolanus (II.2.70), “When blows made me stay, I fled from words,” journalist and author Yasmin Alibhai-Brown was adamant that “words hurt” and can be used to “intimidate and silence certain voices”.

In some cases, she argued, words can also be incendiary, inciting people to abuse and to commit acts of violence.

This was not a view shared by the two panellists sitting next to her. For both Mail on Sunday journalist Peter Hitchens, and comedian, journalist and political satirist Andrew Doyle, political correctness was responsible for a stifling orthodoxy, not just on what people could say in public, but over what they should think. 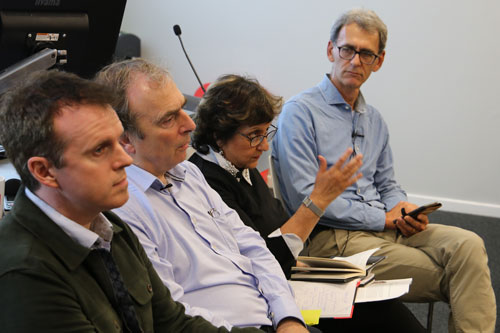 It was no longer simply about regulating speech, agreed Doyle, it has become a form of censorship. “It’s political domination.”

Some of the most fractious exchanges were around the limits of free speech. Even in the United States, where free speech is enshrined in the constitution, there was no such thing as an unabridged right to cause offence, argued Alibhai-Brown.

“Political correctness is not about censorship,” she said. “It’s about good manners and sensitivity to the feelings and needs of others. No society allows total freedom of speech.”

While agreeing that the original purpose of political correctness might have been well-intentioned, Hitchens argued it was increasingly being used to punish people with minority opinions.

Citing the example of registry officials who had been sacked for refusing to recognise gay marriages that clashed with their Christian views, Hitchens asked: “Is that right and fair?”

Perhaps the biggest disagreements were over whether words and phrases such as “letter boxes”, “surrender act” and “traitors” were legitimate political discourse or reckless and incendiary.

Asked whether he thought that Thomas Mair, the killer of Labour MP Jo Cox, had been pushed to stab the MP after reading anti-Brexit, far-right literature, Doyle insisted that we could not know what was in his mind when he attacked Cox.

He was similarly sceptical of claims that the El Paso shooter, Patrick Wood Crusius, had been incited and emboldened by Trump’s tweets denigrating Mexican immigrants.

The fact that his Twitter account showed he was a fan of Trump, was not evidence the president was to blame, he said.

Alibhai-Brown, referring to the Rwandan politician Leon Mugesera, who provoked outrage when he described Tutsi people as "cockroaches" and called for their extermination, said: “It’s about power. It’s never just about language. 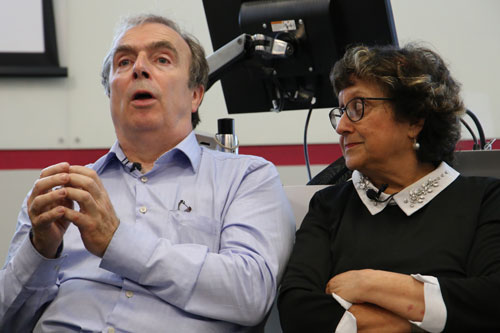 Hitchens suggested that political correctness may have gone too far. “I’ve been offended in my life, probably three times. But the people who offended me knew all about it; I was absolutely furious with them.

“Now, though, people use ‘I am offended’ as an excuse. Often it is an instrument of censorship.”