In a wide-ranging speech, Professor Mera considered ways in which the thorny concept of originality is perceived within screen music and reflected on the implications of recent controversies in this field

Students, staff and members of the public were in attendance on the evening of 8th October 2019 to enjoy an Inaugural Lecture by the Department of Music’s Professor Miguel Mera on the topic: “Screen Music and the Question of Originality”.

The audience were welcomed by the Dean of the School of Arts & Social Sciences, Professor Chris Greer, who said that Professor Mera’s “work ethic, efficiency and high standards are an example to us all”.

Head of the Department of Music, Professor Laudan Nooshin, then officially introduced Professor Mera, noting his many achievements.

Professor Mera, who is a composer of music for the moving image and a musicologist, has had his film and television music been broadcast around the world.

At City he is Professor of Music, as well as both Associate Dean (Research and Enterprise) and Deputy Dean for the School of Arts & Sciences.

He is also the author of European Film Music (2006), Mychael Danna's The Ice Storm: A Film Score Guide (2007), and co-editor of The Routledge Companion to Screen Music and Sound (2017).

Professor Mera is also a voting member of BAFTA.

In his opening remarks, Professor Mera acknowledged the great distances that some members of the audience had come to attend the event (including one who had travelled from South Africa).

He then gave a lecture that drew heavily on his research, backing up his points by playing video excerpts from major motion picture soundtracks including The Artist, Vertigo, The Godfather and The Hateful Eight.

“Every year there seem to be more and more controversial cases of scores that are disqualified from the Oscars,” he said, touching on how scores for films such as Birdman and There Will Be Blood were excluded from the Academy Awards because of pre-existing classical music also appearing in the soundtracks to those films.

“How would one determine when a score has been diluted or diminished in impact by pre-existing material without making a value judgement?” he said.

“The BAFTAs also recently announced that next year the Original Music category will be renamed Original Score, to reflect the ‘more specific focus on composer and score and acknowledge the integral part they play in contributing to the narrative, atmosphere, and emotional landscape of the film’.

“But the focus on awards ceremonies is not entirely fair because there is often confusion when it comes to judging and valuing originality.” 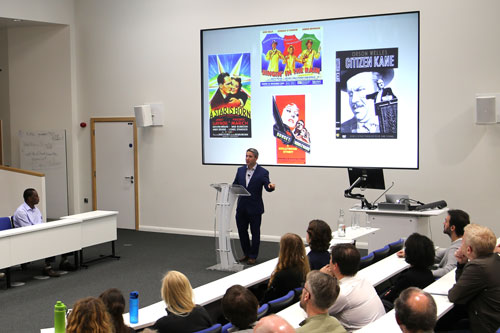 Professor Mera stressed that while originality is frequently heralded, it is difficult to define because of an inherent paradox between acknowledgement of the past and differentiation from it.

“This idea has historic roots that can be traced back to Romantic notions of ‘genius’ and of individuality,” he said.

“There is a risk that we undervalue the fundamental defining characteristic of screen music’s effectiveness, which for me is its specific symbiotic relationship with sound and visuals rather than any notion of intrinsic originality within the musical material.

“I am absolutely not arguing that blatant plundering or unattributed copying should be ignored, but the celebration of certain types of creativity and the disregard for certain kinds of imitation is deeply ingrained and can also be highly problematic.

Professor Mera concluded his talk wondering if awareness of these issues is the first step towards making clearer judgements about the role, value, location, and use of music in screen media.

“If we are to fully understand innovation, creativity and, yes, originality,” he said, “then I think we need to question whether we really value screen music as screen music or whether we secretly crave a concert with pictures.”

Further details of Professor Mera's wide-ranging research are on his profile page.

Find out more about studying for an undergraduate or postgraduate music degree at City, University of London by visiting the Department of Music's pages on our website.