Cross section of adults from the UK public rank sight, hearing and balance as top three most valuable out of eight human senses.

Which of our senses is most important to us? We may intuitively understand that certain senses like sight or hearing are particularly valuable in our day-to-day lives. However there is limited scientific evidence regarding the public’s attitudes to our different senses. Researchers at City, University of London, have now put this question to the test.

The academics surveyed a cross-section of 250 adults from the UK general public, with respondents asked to rank how highly they valued each of eight human senses relative to the others. 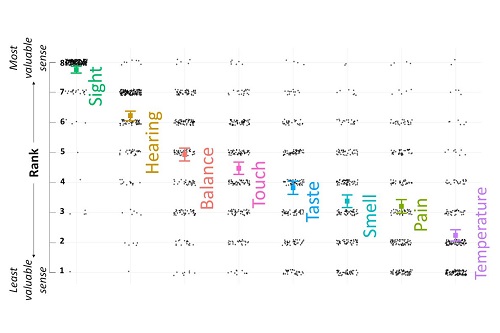 The relatively high ranking of balance suggests that the ‘five senses’ we often learn about early in life may not fully correspond to the sensory functions we actually value the most. It is also consistent with evidence showing that problems with balance can be a key factor in reduced quality of life, considering its importance to our mobility and daily activities.

Respondents also took part in a time-trade off (TTO) exercise, which is a common technique used by health services to estimate the impact of a condition on those affected. They were asked to compare the prospect of 10 years without sight versus varying amounts of perfect health (ranging from 10 to 0 years). This exercise suggested that members of the general public would, on average, choose 4.6 years of perfect health over 10 years of life with complete sight loss. When a similar exercise was performed for hearing, respondents chose an average of 6.8 years of perfect health as an alternative to 10 years of life with complete hearing loss.

While the findings of the study suggest the public strongly value their sight over their other senses, it is important to note their judgements may be based on limited information on what a state of sensory loss might be like. It may not reflect their value judgement should they be provided with adequate further information about living with the condition.

For example, respondents with a chronic condition or family history of sensory loss rated living with hearing loss as less impactful to them than those without. It could be that their wider experiences and knowledge may help them better understand the actual impact of living with the condition.

Marital status, educational level, and religiosity had no significant effects on respondents’ choices in the online survey.

David Crabb, Professor of Vision and Statistics at City, University of London and Director of the Crabb Lab which conducted the study said:

It’s so important to understand what the public and patients’ perceptions and fears may be when it comes to the loss of the senses, as this should inform how health professionals triage and support them when loss occurs.  While sensory loss can be devastating, it’s important to educate the public on how they might cope and adapt.

“For example, we also recently published a study on age-related macular degeneration, which is by far the most common cause of blindness in the UK. It suggests that the guidance and advice of the diagnosing health practitioner may play a key role in how the person perceives the impact of the condition on their daily lives and of it worsening in the future."