The meeting was hosted by the United Nations Conference on Trade and Development (UNCTAD) and took place at the UN’s Palace of Nations headquarters in Geneva.

The event was a jointly arranged between the CCCI, the Commonwealth, and UNCTAD, placing City at the forefront of global debate in this field.

These are areas traditionally considered peripheral, or risky or unruly and, in some cases, subversive.

Dr Bennett said: “While the areas covered by the Creative Economy have long existed, it has only been ‘noticed’ and targeted as such relatively recently.”

The untapped potential of creative economies

UNCTAD’s Creative Economy programme plays a leading role in raising awareness of the importance of culture and the creative sector for development, supporting national agendas and strengthening international partnerships, as well as generating and publishing reliable data globally.

The Creative Economy can play an important role in the trade and production capabilities of developing countries, such as creating jobs, improving innovation and competitiveness, and encouraging the growth of SMEs.

According to UNCTAD’s Creative Economy Outlook report (2018), which Professor Pratt helped draft, it is one of the fastest growing sectors of the economy as a whole. 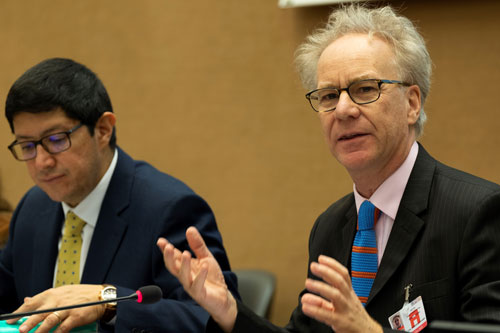 For instance, the global market for creative goods and exports more than doubled between 2002 and 2015. It commonly outperforms established sectors, such as auto manufacture and construction.

The developing world faces particular challenges, in terms of internal capacity to support industries, access to global markets, and a lack of formal statistics and measurement.

UNCTAD seek to address that (for the Creative Economy and elsewhere), for instance by developing and reporting data on trade that simply did not exist before 2008, and benchmarking against UN Sustainable Development Goals.

With digital technologies driving a so-called ‘Fourth Industrial Revolution’, it’s essential that developing countries have the tools to be part of such fast-paced progress in order to maximise their creative potential.

The expert meeting provided opportunity to discuss the major challenges at hand and to come up with recommendations.

Professor Pratt, who is Professor of Cultural Economy in City's Department of Sociology, gave introductory and closing remarks at the meeting.

“Don’t tell artists what they can do already, or have a top-down policy; it doesn’t help,” Professor Pratt told the assembled delegates in his opening address.

“Create institutions that help artists and creatives talk to each other and make connections. That's what's missing.”

The meeting featured contributions from academics, policymakers, politicians and practitioners representing five continents, in front of an audience of around 70 attendees from NGOs and national delegations.

Key policy issues and emerging trends in the global creative economy were discussed over four expert panels, including areas such as national and international development strategies, challenges of measurement and environmental harm, and business capacity-building.

Dr Bennett said that the meeting “showed clear signs of the growing potential for collaboration in this field globally”, and consensus around a renewed research agenda: that is, between national research agencies, academics, intergovernmental agencies and business representatives.

He added: “The UN have just formally adopted 2021 as the ‘International Year of Creative Economy for Sustainable Development’ – further evidence of it being at the forefront of the agenda.

“The labour market is characterised by a hollowed-out structure, with a missing middle, between large numbers of freelancers and a small number of powerful corporations.

“Typically, policy has been ‘top-down’ (government-dictated), or ‘bottom up’ (leave it to communities or markets).

“The newer approach seeks to ‘govern from the middle’, by developing and supporting spaces and networks for interaction.”

Professor Pratt and Dr Bennett will now prepare a report on the meeting, to form the basis of a text for the next UNCTAD Creative Economy Outlook, in preparation for the 15th UNCTAD quadrennial conference in 2020.

Professor Andy Pratt is Professor of Cultural Economy at City, as well as Director of the CCCI. He is an internationally acclaimed expert on the topic of the cultural industries. He is a Fellow of the Royal Society of Arts, a Fellow of the Royal Geographical Society, and an Academician of the Academy of Social Sciences. He has published over 100 items: books, chapters and articles. He has developed definitions of the cultural sector that are used as standard measures by UNCTAD and UNESCO.

Dr Toby Bennett is a recent addition to the CCCI. He joined City as a Post-Doctoral Research Fellow from Solent University, where he worked on changing urban cultural development strategies, the ‘Music City’ as emerging policy object, and their embeddedness in local social histories. Prior to embarking on an academic career, he trained as a musician and worked in the music business. He has since advised, commented or written reports on various aspects of the music economy for a number of cultural consultancies, trade bodies and journalists.

The Centre for Culture and the Creative Industries offers a successful MA in Culture, Policy and Management, and will launch a new MA in Global Creative Industries in 2020. Both MAs draw upon the research and world-leading expertise of staff in the CCCI.