Two former Leaders of the Opposition and the Shadow Foreign Secretary were among an impressive roll call of high-profile public figures to speak to City, University of London students during an intensive five-day political journalism course.

Former Leader of the Labour Party Ed Miliband, the Rt Hon Emily Thornberry MP (Shadow Foreign Secretary and MP for Islington South), and the Rt Hon The Lord Howard of Lympne all gave students on City’s MA Broadcast Journalism and MA Television Journalism courses the benefit of their years of experience in dealing with political journalists.

But it wasn’t just leading political lights that students heard from across the week. Guests from the world of journalism were equally impressive.

There were also talks from former ITN and BBC political analyst David Cowling about local government – well timed with local elections taking place the same week – as well as legendary political documentary maker Michael Cockerell, who talked students through clips of some of his award-winning films. 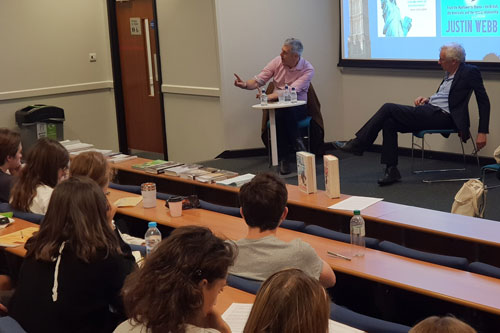 Justin Webb advising students on how to conduct a big interview

A day at Westminster

The Political Headlines course is a key part of the MA journalism programme. It is run twice a year by Barney Jones, the former editor of Breakfast With Frost and The Andrew Marr Show, now a visiting professor in the Department of Journalism at City.

While much of the course took place at City, the third day was spent entirely at Westminster.

Twenty students were treated to a breakfast briefing with The Guardian’s Defence and Security Editor Dan Sabbagh and MP for Barrow and Furness, John Woodcock, after which they were joined by the rest of their coursemates for an intensive day of talks, debates and Q&A sessions.

The students hugely enjoyed the week and the incredible array of insights they were able to benefit from.

Laura Cain, an MA Broadcast Journalism student, said: “I found the course fascinating. In particular, I enjoyed the full day at Westminster where we received some razor-sharp advice from Lobby journalists and heard from MPs across the political spectrum.

“I feel much more knowledgeable about how to navigate the political landscape now.”

An audience with the Speaker 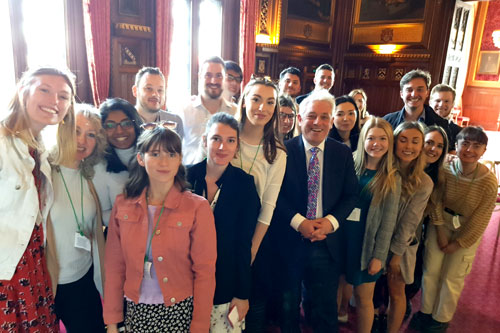 A week and a half after Political Headlines week, MA Television Journalism students returned to Westminster a second time, for a selection of special meetings arranged either side of Prime Minister's Questions (PMQs).

After a morning briefing with former Sport Minister Tracey Crouch MP and Daily Mirror Associate Editor Kevin Maguire, students enjoyed a tour of the Palace of Westminster, before being ushered into the State Rooms of the Speaker's House for a talk by the Speaker of the House of Commons John Bercow MP.

There was also a talk from Press Association Chief Political Photographer Stefan Rousseau, who discussed his career and talked students through some of his most iconic political pictures.