Linus Bauer was born profoundly deaf and was only able to regain his hearing at the age of 13. The recent MSc Air Transport Management graduate, who received an outstanding academic achievement award, talks about his time at City.

Linus Bauer is a shining example of how it is possible to achieve success despite the odds stacked against you. The alumnus, who recently graduated with an MSc Air Transport Management from City, University of London’s School of Mathematics, Computer Science and Engineering, was born deaf.

At 13 years old, thanks to advancements in medical technology, Linus had his hearing restored after being fitted with a cochlear implant. Following this, he underwent intensive speech training for several years, enabling him to communicate with others effectively.

Today, the 33-year-old is a multilingual, high-flying aviation professional with the ability to speak English, French, German, and basic Mandarin.

Linus, who received an Outstanding Academic Achievement Award in the presence of his family, friends and peers at City’s Dubai graduation ceremony this month, is a firm believer in the importance of perseverance to achieve success. 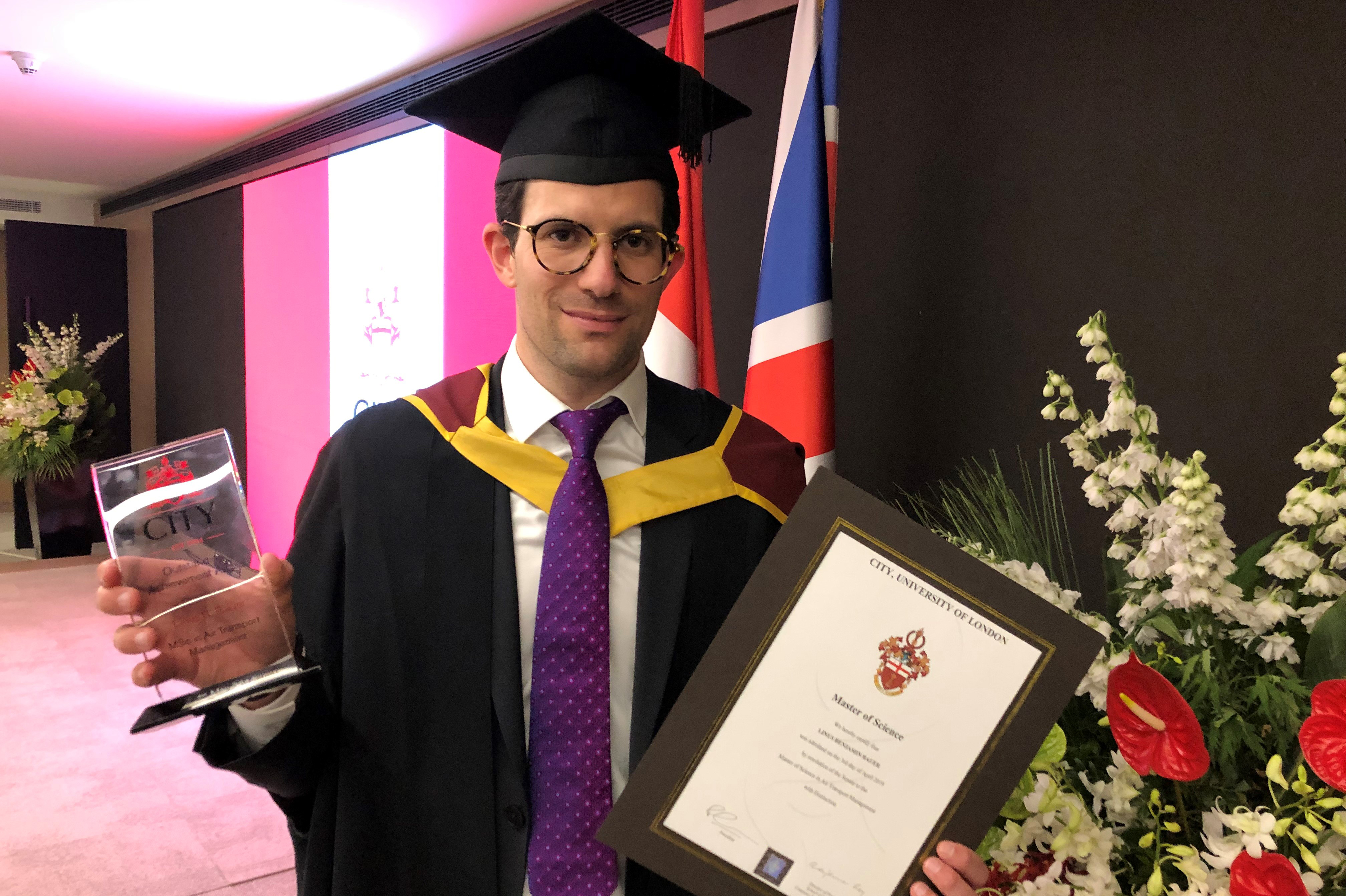 “My childhood struggles and experiences have played a role in shaping the warrior in me. My motto in life has always been to work twice as hard and to never give up in the face of setbacks.”

Linus has held roles at major airlines such as Etihad Airways and Singapore Airlines, and his most recent position has seen him work as Manager Revenue Management and Pricing for a Swiss-based airline. The self-confessed aviation enthusiast is currently involved in doing freelance consulting work for airlines in Egypt, Oman and Eastern Europe.

Speaking about his time at City, Linus says:

"Every single module that I took was an eye-opener. I enjoyed doing group work with my peers because it gave me the opportunity to network and connect with people from different professional backgrounds and cultures. The ability to take my modules in London, Dubai and Frankfurt, proved to be beneficial for me while I was trying to strike a balance between my studies and professional commitments.

“Although it was intensive, I found my final academic project enjoyable to work on. For this project, I studied the commercial viability of ultra long-haul operations, using Qantas’ Perth to London service as the basis of my study. As part of this study, I travelled to Australia to visit the head office of Qantas and the University of Sydney’s Charles Perkins Centre, which is a partner of Qantas.”

Asked about the hurdles he faced while studying for his degree, Linus says: “The main challenge was to complete all eight modules and the final academic project within 13 months. Thanks to the invaluable support of my family and lecturers, I was motivated to embrace the challenges and succeed. City’s MSc degree in Air Transport Management has paved the way for me to now pursue a PhD.”

Designed for busy industry professionals, City’s four postgraduate degrees in Aviation Management, offered through the School of Mathematics, Computer Science and Engineering are the leading mid-career programmes in air transport and have the backing of the Royal Aeronautical Society.