Professor Tong Sun leads a team of researchers to exhibit the Pantograph, which has been developed with Faiveley Bracknell Willis.
First published Tuesday, 21st May, 2019 • by John Stevenson (Senior Communications Officer)

Rail transport technology developed at City, University of London was given prominence at the UK’s largest rail exhibition, Railtex 2019.

The Closed Loop Intelligent Pantograph, developed by Professor Tong Sun OBE (Director of City's Research Centre for Photonics and Instrumentation) and her team, and Faiveley Bracknell Willis, was exhibited from May 14th to 16th at the NEC in Birmingham. Professor Sun, Dr Ye Chen and Dr Miodrag Vidakovic were on hand at the exhibition. 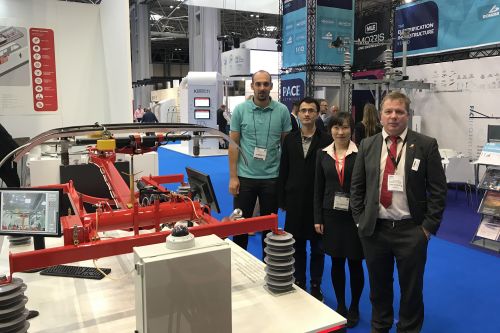 The potentially revolutionary Pantograph, currently in service trials in the UK, is ­fitted with fibre optic sensors, paired with global positioning system (GPS) and video equipment.

The sensor system measures various Pantograph and object linking and embedding (OLE) interface parameters which can then be used to determine the condition of the Pantograph or the overhead line with which it interfaces.

This data is then presented via a user dashboard in multiple train configurations without affecting current carrying capability.

The Pantograph research began by way of a 2011 collaborative funding grant from the Engineering and Physical Sciences Research Council (EPSRC) which led to the joint development of an active Instrumented Pantograph by City researchers and Faiveley Brecknell Willis.

This initiative was awarded a further grant by the Railway Industry Association (RIA) after winning its innovation competition sponsored by Rail Safety and Standards Board (RSSB).

The Pantograph project is presently funded by Innovate UK.

Professor Sun is City’s first female Professor of Engineering. She is the holder of a Royal Academy of Engineering and Faiveley Brecknell Willis Research Chair, and was awarded an OBE in the 2018 Queen’s Birthday honours list for services to Engineering.  She has been a role model in research and education for  over two decades for both female and ethnic minority STEM (Science, Technology, Engineering and Mathematics) staff and students.