The City Law School held its 2019 Postgraduate Research Forum on May 10th.

The presentations of Isabella Mancini (The Place of Fundamental Rights in the New Generation of EU Trade Agreements with other Developed Economies) and Alex Powell (Queering Refugee Law: Credibility, Authenticity, and the Lived Experiences of Sexual and Gender Minority Asylum Seekers) were selected as the most outstanding during the Research Forum. They were awarded £250 each for their efforts.

Isabella joined City, University of London, in 2017, as a PhD candidate and as an Early Stage Researcher under the Marie Curie Innovative Training Network on EU Trade and Investment Policy (EUTIP), under the supervision of Professor Elaine Fahey and Dr Tawhida Ahmed.

Her research poses the question: “How ‘deep’ are fundamental rights in the new generation of EU trade agreements with other developed economies?”.

The question is motivated by the lack of academic research of the depth of the so-called “new generation of EU deep trade agreements” in terms of fundamental rights. ‘Deep’ is understood in two ways: as indicative of the dimension of trade law-making to be analysed and as embodying the normative benchmark, the broader normative stance being one of democratisation of global governance and law-making beyond the state. The focus is on two sets of fundamental rights, namely labour rights and data protection and privacy rights; and on the latest trade initiatives between the EU and other developed economies in North America and Asia: Canada, the US, Singapore and Japan. 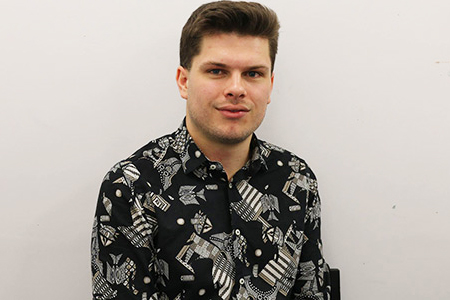 Using a series of semi-structured interviews, Alex will interrogate whether there is a mismatch between the ways in which sexual and gender minority claimants experience their identities and the knowledges decision-makers employ when assessing the credibility of a proclaimed identity. He is supervised by Dr Tawhida Ahmed and Dr Nora Honkala.