‘The Judge’, highlighting the challenges faced by the first female judge in the Palestinian Shari’a Courts, Judge Khaloud Al-Faqih, was screened at the Gray’s Inn Place campus, followed by a discussion.
First published Wednesday, 22nd May, 2019 • by City Press Office (General enquiries) 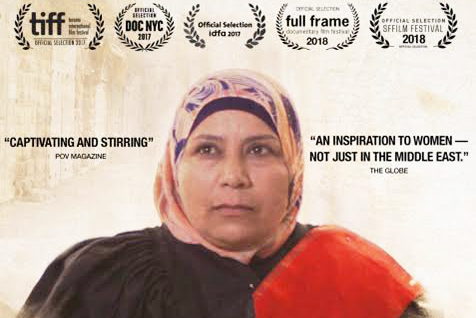 On May 2nd, The Association of Women Barristers (AWB) hosted a successful screening of the ‘The Judge’ at Gray’s Inn Place campus, detailing the journey of Judge Khaloud Al-Faqih and her appointment as the first female judge in the Shari’a Courts in Palestine.

Following the screening there was a panel discussion about being a minority within a profession and the challenges of breaking through the ‘glass ceiling’.

The event was chaired by City Law School Lecturer, Lynne Townley, who is also the Chair of the AWB..

The event was well attended by City Law School students and members of the Bar and was an important event in the AWB calendar for 2019  - celebrating a century of women in the legal profession.