Student start-ups from across London universities competed for cash prizes at the Social Enterprise Festival.

Marking its third instalment, the two day business festival saw around 450 students, staff and visitors take part in classes, panel discussions and workshops, focusing on how enterprises can create positive changes in the world.

This year marks the first time that the festival was open to other universities, encouraging collaboration between young entrepreneurs.

The festival included a panel debate discussing the difficulties and challenges of creating sustainable social enterprises.

Attendees were also invited to shop socially at the Buy Social Marketplace, a collection of sociable brands from London universities.

“It is a journey”

The ‘Pitch for Good’ competition saw 11 early stage businesses compete for cash prizes to go towards their ventures. 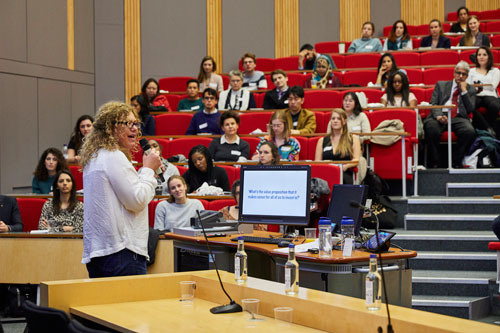 There were three winners on the night, one of them being Mohammed Miah, (BSc Computer Science), with Bubble Mind, a dedicated mobile application which creates colours and sounds to help calm and educate children with autism.

Mohammed, who founded his idea while working at a centre for autistic children, had won CitySpark’s People’s Champion award earlier in the year.

Mohammed said: “The journey from CitySpark to the Social Enterprise Festival has been incredible. I am much more confident in my pitching and speaking since I have been a part of the Launch Lab.

“At the last competition I was one of the youngest to compete, but a lot has changed since then and I now know how to clearly explain my story. With advice from the team I use a real example of a child called John, who inspired me to create Bubble Mind.

“John was autistic and none of his teachers knew how to get him to calm down when he was upset. However, once he started playing with Bubble Mind he would start to feel more at ease.”

“One of the things which makes Bubble Mind unique is its simplicity. It is very easy to overcomplicate things by adding so many features to a screen, however the best thing to do is keep it clear and easy to use.

“Much like everyone likes to play with bubble wrap in the way it feels and sounds, Bubble Mind lets children create and learn with very basic tools.

“The prize money will now go towards testing my apps with real people to create data on how I can improve its functionality.”

Winners of Pitch for Good

This year City invited students from across London universities to compete. 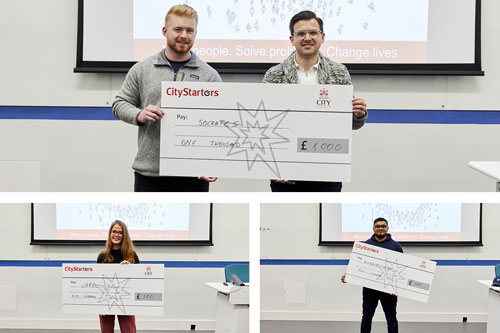 Luke said: “There is a real fear with technology in healthcare as people do not want to lose out on human interaction, however Socrates is using artificial intelligence to enhance and empower clinicians to help them make the right decisions when working with patients.

“The money we have won today will be used to flesh out our business plan with a view to launching this app. We will also run a randomised survey with users to see if this app does improve confidence in clinicians.”