Karolina Batistova, (LLB Law), was invited to watch Barcelona take on Lyon in the UEFA Champions League at the iconic Camp Nou. 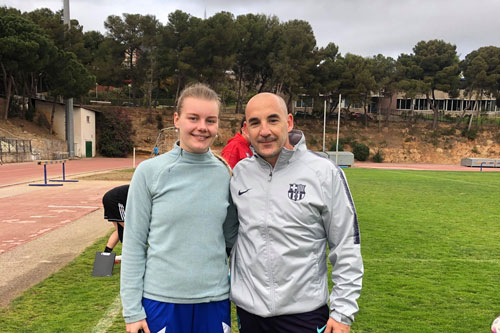 The trip was organised as part of a Santander UK initiative to support female students in both their sporting and professional lives.

Karolina, who was treated to a six goal thriller where Barcelona ran out 5-1 winners, said:

“The tours of the stadium were amazing and we got to go up to the press box and make the same walk as the players through the tunnel leading out to the pitch.

“The best bit about the trip was by far the match, it had everything and it was my first time at Camp Nou. I support Slavia Praha back home in Czech Republic and go to their games, but to see Lionel Messi play was special.

“It was very interesting to hear from Laura Ràfols, who spoke about her career and how she started. She told us about how she focused on education after her playing career and stressed that as important to us.”

“I played football for fun in high school, my brother and uncle used to play and are huge fans, so it is in my family. 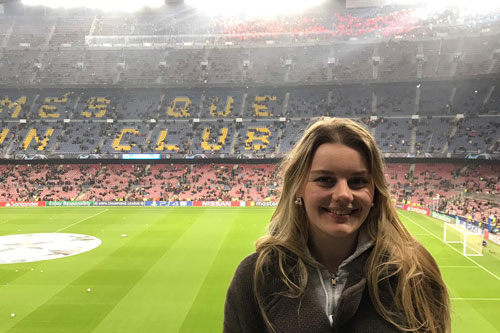 “However, City gave me my first opportunity to join a team and play competitively in league games. To be selected as the captain was amazing and I feel proud of the women in our team.

“Playing football really helps take my mind off the stress of exams or deadlines and having a women’s team offers our female students the chance to just play football with other people. It has been a challenging season so far, but we all enjoy feeling part of a team.

“Football has historically been viewed as something reserved for men, but the women’s game is really increasing.

"At City there are so many sports teams that female students can join. It is important to make sure everyone feels encouraged to get involved and it is great that we have these options here.”

City is a recipient of Santander Universities UK which launched in 2007; encompassing 84 universities and providing over £10m of funding in 2018 alone. The programme focuses on education, entrepreneurship and employability giving all students the opportunity to succeed.