The Mindfulness All Party Parliamentary Group (MAPPG) recently met for a hearing on Mindfulness, Ageing Well and Older People. The event drew together politicians, charity workers and researchers to discuss the role mindfulness can play in improving the quality of older people's lives.

The Mindfulness All Party Parliamentary Group (MAPPG) recently met for a hearing on Mindfulness, Ageing Well and Older People. The event drew together politicians, charity workers, and researchers, with over 20 universities represented in the room, alongside representatives from leading charities working with the older population today.

The event followed two strands of enquiry: the role mindfulness can play in improving the quality of older people's lives, and how mindfulness can positively affect the ageing trajectory throughout the entire life course from early adulthood onwards.
The panel was chaired by the MAPPG co-chairs Tim Loughton MP (Conservative) and Chris Ruane MP (Labour).

Dr Edginton, spoke about her research into the impact of mindfulness on people with mild cognitive impairment and dementia. She has designed individual and group-based mindfulness and compassion interventions that are tailored for people with memory problems and their carers. 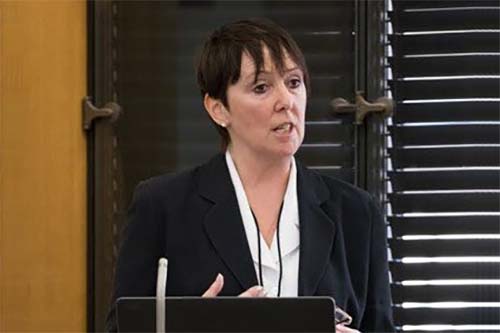 As a Neuropsychologist, Dr Edginton has worked with individuals with mild cognitive impairment and dementia and has published research that demonstrates changes in key areas of the brain that are associated with memory, emotion and executive function impairments including the hippocampus, amygdala, and prefrontal cortex. She has found that participants with memory impairments who attended regular mindfulness sessions demonstrated a reduction in anxiety, stress and rumination with increased levels of self-compassion that are linked to changes in these brain regions.

At the end of the short mindfulness courses participants with mild cognitive impairment and dementia reported that they noticed that their enjoyment of day-to-day life had increased, they noticed greater present moment awareness and they had increased their social interactions and felt less anxious. Whilst there was no improvement in cognitive function, Dr Edginton found that participants with memory difficulties remained cognitively stable.

Our initial findings indicate that mindfulness interventions have the potential to improve psychological well-being and slow cognitive decline for people with memory difficulties and their carers.

Dr Edginton is planning to extend these initial clinical findings with longitudinal research studies of mindfulness in clinical populations. This will include larger scale studies for people with dementia and their carers who also benefit greatly from mindfulness interventions, with similar reductions in stress and anxiety.

To read, watch and listen to more from the full hearing, and the other speakers, visit the Mindfulness Initiative website.