Mathematical modelling in response to ecological and evolutionary questions

Professor of Mathematics, Professor Mark Broom, will be speaking at the 7th edition of the Mathematical Models in Ecology and Evolution conference in Lyon, France, from July 16th to 19th. His presentation will be titled “Generalized Social Dilemmas: The Evolution of Cooperation in populations with Variable Group Size”, which will discuss how increased variability of the size of interacting groups can promote cooperative behaviour.

This work is supported by a multi-national European Union grant (number 690817) that he is leading: Conflict, Competition, Cooperation and Complexity: Using Evolutionary Game Theory to Model Realistic Populations.

The Lyon conference gathers together researchers with an interest in building abstract mathematical models in response to ecological and evolutionary questions.

It is also aimed at promoting the use of modelling approaches to the next generation of PhD and early-stage post-doctorate academic researchers, who are encouraged to attend and present their findings in the field. 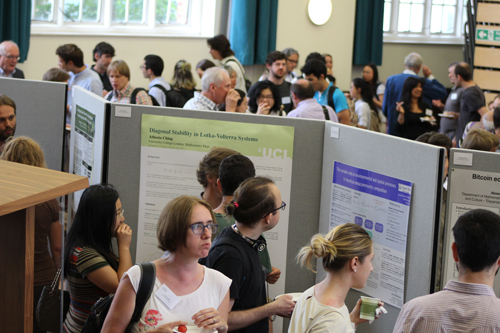 The July 2017 edition of the conference brought together over 200 participants from a broad range of disciplines with sessions about forecasting cancer evolution; game theory and cooperation; hosts, parasites and pests, population dynamics; evolutionary game theory, and; mathematical genetics.

Among the conference highlights was a public lecture delivered by Professor Iain Couzin of the University of Konstanz and the Max Planck Institute for Ornithology.

The support of the London Mathematical Society, the European Society for Mathematical and Theoretical Biology (ESMTB), and City's Department of Mathematics was fundamental to our success in 2017. We look forward to joining our colleagues in Lyon next month.