CEO and Founder of Elvie, Tania Boler is joined by Octopus Ventures Partner Luke Hakes in discussion with Axel Threlfall for the latest EntrepreneursTalk at Cass event.

Femtech entrepreneur Tania Boler and Octopus Ventures Partner Luke Hakes have discussed the importance of passion during the latest EntrepreneursTalk at Cass event.

Ms Boler is the CEO and Founder of Elvie, a British health technology company developing smarter technology for women.

After launching only two products, the Elvie Trainer and the Elvie Pump, the company has attracted the largest investment in a femtech company, securing £32 million ($42 million USD) in its most recent round.

With a background in health, Ms Boler has always been passionate about breaking taboos and stigma around intimate health issues.

But, she said, it was not until she fell pregnant and learned about the importance of pelvic floor strength that she realised there was both a significant health risk that many women were unaware of, and a gap in the female technology market with the potential to improve lives.

“Traditionally, women would go to hospital, lie in a bed, sit up in stirrups and be hooked up to a massive machine with all these electrodes to see how they’re doing,” she said.

“The Eureka moments were in the questions of ‘Why can’t we have something that women can use at home, why can’t it be easy and why can’t it be fun’ and from there I was completely determined to bring this product (the Elvie Trainer) to women.”

Luke Hakes, Partner at Octopus Ventures, who were among the early investors in Elvie, said femtech and particularly issues around urinary incontinence and pelvic floor exercises were not things they were aware of in 2015.

“We kind of knew there was something special in front of us when we met Tania, we met the team and we heard the vision,” he said.

“The articulation of being able to provide this beautiful product that addressed these issues really led us to double-click on the area, and the more we looked at it the more we realised that these guys were absolutely right.

“But more than that, we realised that they had a team that could probably deliver it.” 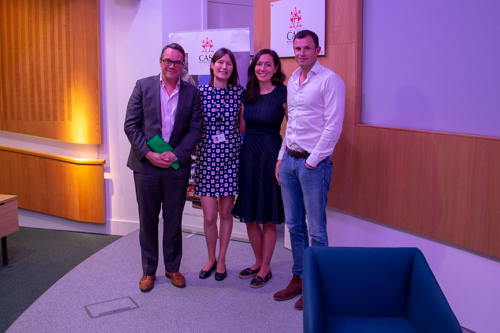 Mr Hakes said passion in an entrepreneur, the kind of passion that he and others at Octopus saw in Ms Boler and her team, is critical to influencing investors.

London as a rival to Silicon Valley

Both Ms Boler and Mr Hakes agreed that London has a wealth of untapped potential in the entrepreneurial and startup scenes.

“London’s position in Europe, if anything, continues to strengthen and I don’t think Brexit has detracted from that,” Mr Hakes said.

“London has got such incredible talent from so many different countries and that’s really important to us,” said Ms Boler.

“And also as a founder, it is the most entrepreneur-friendly as it has a huge ecosystem with access to capital and, increasingly, experience and expertise which is beginning to rival Silicon Valley.”

Mr Hakes said some United States-based investment firms were beginning to set up offices in London, further demonstrating the city’s position as a serious rival to more established start-up scenes.

“This is not a market that’s in retrenchment, this is a market that the world is seeing as a growth opportunity,” he said.

Catch up on the conversation in full on City, University of London's SoundCloud account here.