The Royal Academy Engineering/Renishaw Chair in Precision Metrology at Huddersfield University is presented with an honorary degree for her outstanding contribution to science and technology, and leadership in higher education.
First published Tuesday, 16th July, 2019 • by John Stevenson (Senior Communications Officer) 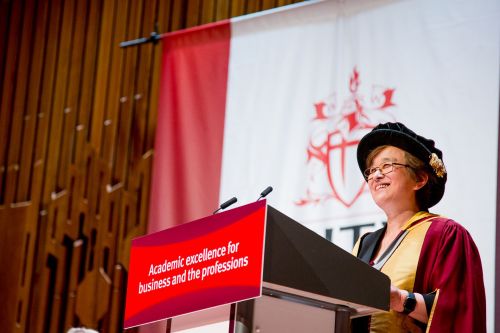 Professor Dame Xiangquian ‘Jane’ Jiang was awarded an Honorary Doctor of Science degree (Honoris Causa) by City, University of London, in recognition of her outstanding contribution to science and technology, and leadership in higher education.

The presentation was made during the graduation ceremony of the School of Mathematics, Computer Science & Engineering on Tuesday, 16th July.

In 2017 she was recognised in the Queen's Birthday Honours list and was made a Dame Commander of the Order of the British Empire for services to Engineering and Manufacturing.

After receiving her honorary degree, Professor Dame Jiang advised graduands to “continue to build on the foundation” of their newly acquired degrees:

Do lots of reading, undertake research and have that curious mind, always asking ‘why’.

Born in 1955 in Shanghai, China, Professor Dame Jiang started her career in 1970. She attended Huazhong University of Science and Technology, completing a Master’s degree in 1992, and a PhD in 1995. Her interest in science and engineering was awakened while seeking solutions for efficient manufacturing processes.

From 1994 to 1995, Professor Dame Jiang was a Visiting Scholar at the Centre for Measurement and Instrumentation at City, sponsored by the British Council. Over the last 20 years she has been supportive of the research work at City, as an examiner, referee and role model for our students. She has maintained close contact with several senior academic staff members at City.

Professor Dame Jiang was awarded the Royal Academy Engineering/Renishaw Chair in Precision Metrology in 2016 and in 2017, becoming the Director of the Engineering and Physical Sciences Research Council’s (EPSRC) Future Metrology Hub, one of eight EPSRC-funded Future Manufacturing Research Hubs.

Today, engineering is more interdisciplinary and is a fundamental basis for our current high-tech quality of life. Constantly on the agenda is the need to preserve the earth’s resources and to recycle and reuse materials where possible. Improved design and manufacturing techniques can ensure the efficient use of raw materials and this has become very important to society.