Professor Lord Winston’s lecture, ‘The Shadow of Eugenics’, looked back at the history of eugenic thought, its catastrophic application during the 20th century, and influence in the present day.

We were delighted to welcome Professor Lord Robert Winston to City to deliver our first 125th Anniversary Lecture entitled, ‘The Shadow of Eugenics’, which was hosted by our School of Health Sciences.

Eugenics can be considered a set of beliefs and practices concerned with trying to improve the ‘quality’ of human populations through the control of genetic traits inherited from parents.

Professor Winston took the audience on an emotive journey, describing the history of eugenic thought. During the late medieval and early renaissance period, individuals with physical and intellectual birth defects were often deemed ‘sub human’, and Professor Winston shared paintings from the time suggestive of this perception.

He highlighted the work of Sir Francis Galton, who was the first to use the term ‘eugenics’ in 1883 in the United Kingdom. Sir Galton’s work had a major influence on the eugenics movement.  This influenced the race and sterilisation laws of the United States in the late 19th and early 20th century, and the extermination policies of Nazi Germany in the 20th century. 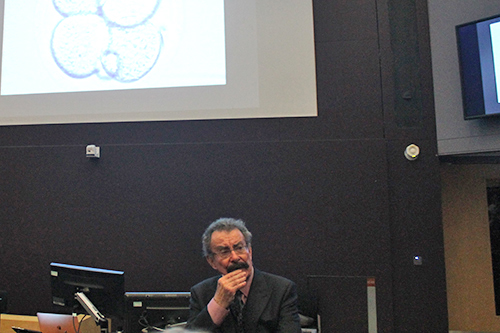 Professor Winston described some of his own fertility research, the development of in vitro fertilisation in the latter 20th century, and talked about the ethical issues surrounding human embryo screening. For example, the question of extending the screening of embryos, from for known inherited diseases, to screening them for desired, complex human traits such as intelligence. 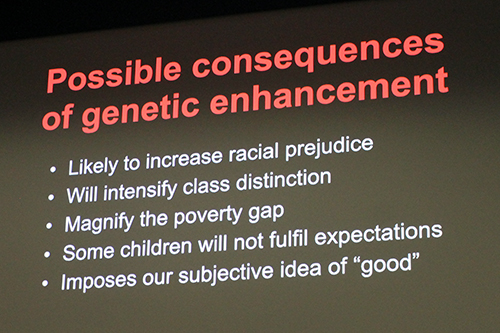 Professor Winston also sounded a warning against the possible societal ramifications of human genetic modification, and how market pressures may influence those who could take advantage of such advances in technology, and conversely, those who may not.

“In my mind, what is so sad is to see people being compartmentalised so much into the arts, the humanities and the sciences, without recognising that accurate knowledge has to be very much more collaborative, together, and I know that is very much something which is being looked at by this university.

Reflecting on the lecture, Professor Debra Salmon, Dean of the School of Health Sciences at City, said:

“We are incredibly grateful to Professor Lord Winston for his thought provoking lecture, which took us on an emotive journey through what is a challenging subject, and which reflected the sheer brilliance of his knowledge and experience over a long and distinguished career in reproductive medicine.”

To find out more about the rest of our 125th Anniversary activity, visit the dedicated website.