Justice of the UK Supreme Court Justice, Lord Carnwath of Notting Hill, gave the lecture, Climate Change and the Law, at City on 13th February. 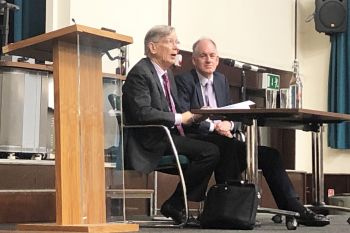 The second in The City Law School’s Constitutional Law Lecture Series, Lord Carnwath talked to a number of Law students and staff about the way in which legal provision, legal agreement and legal obligation empower and compel countries across the world to tackle the challenges posed by climate change.

Interest in the environment

Lord Carnwath of Notting Hill, KT CVO, has been a Justice of the UK Supreme Court since April 2012, previously serving as Lord Justice of Appeal and Judge of the High Court.

He practised at the Bar and was appointed QC in 1985. Lord Carnwath has a long-standing interest in environmental issues and is President of the UK Environmental Law Association.

The UK Supreme Court is the final court of appeal in the UK for civil cases, and for criminal cases from England, Wales and Northern Ireland. It hears cases of the greatest public or constitutional importance affecting the whole population.