Developed at City, an educational training game on drug dosages and safety may have helped influence practice at Beira Central Hospital, Mozambique.

Academics from the School of Health Sciences at City, University of London, have developed an educational board game in which teams take turns answering medication safety questions and calculating drug doses. The game transforms what is often an individual and high risk decision into something fun and participatory.

Known as Drug Round™, the board game was recently taken up by nurses at Beira Central Hospital in Mozambique during a training session on drug calculations. 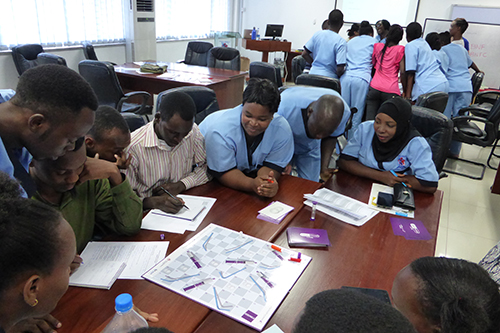 The ‘Snakes and Ladders’ based game translated culturally and linguistically for players (known as ‘Cobras e Escadas’ in Portuguese, the official language of Mozambique), who participated enthusiastically, laughing, contributing to group solutions together, asking for advice from pharmacists and using calculators to accurately calculate doses. The game is also a discreet way of players’ gauging drug calculating abilities though a simple count of correct and incorrect answers.

Feedback from the nurses after the session was overwhelmingly positive. One nurse said that, “the training game was really good, because it opened the mind more and so we will remember it always.”

There were signs that nurses intended to make changes to their practice having played the game, including a comment from a nurse who said, “I will explain to my colleagues how to calculate IV drip rate and how to administer. I will use the calculator when necessary to calculate.” 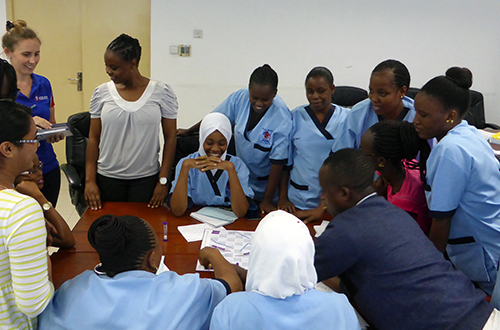 Karen Rawlings-Anderson, co-inventor of the game and senior lecturer in Adult Nursing at City, said:

We were trying to think of a way of making a rather ‘dry’ subject more engaging. We came up with the idea of a board game based loosely on snakes and ladders. When we piloted it with our students, they really enjoyed it and became quite competitive! As it worked so well, we got it professionally manufactured so it could reach a wider audience.

City is now keen to bring the Drug Round™ game to a wider international audience, by translation of this training aid into different languages. Drug Round™ can be used by healthcare professionals that prescribe, dispense and administer drugs such as medical, optometry, dental and pharmaceutical professionals.