The Division of Optometry and Visual Science at City, University of London has developed a student placement programme with the LV Prasad Eye Institute (LVPEI), which is headquartered at its Centre of Excellence in Hyderabad, India.

The students observed a range of clinics at the Institute, experiencing how patients with various problems such as low vision, corneal, retinal problems and cataract are treated. 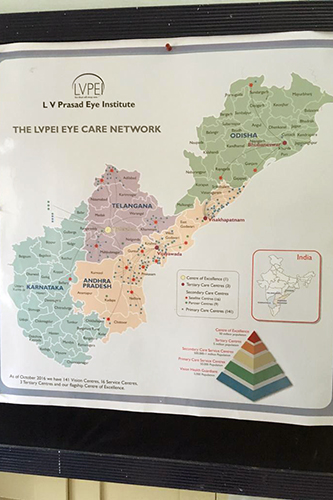 The LVPEI system is operated on a ‘pyramidal model’, which involves various primary and secondary vision centres (over two hundred centres in total) screening the local population, and referring those that may have a pathology (disease), or need further investigation, to the Centre of Excellence in Hyderabad, which is where the placement students were based. The students did also visit some of the primary and secondary centres of the Institute, which helped them put into perspective how the whole pyramidal model was implemented in the LVPEI system.Reflecting on the experience, student Aamena Adam said:

The opportunity of travelling, experiencing the culture and observing the clinical care of patients at LVPEI has been extremely beneficial, not only to my studies and my career, but also my personal skills and development. I would love to visit again!

Fellow student, Aaron Uraon, wrote a blog about his experience which has been published on his website.

The Hospital Saturday Fund funded four of the placements and will be funding a further four each year for the next two years, meaning that 12 Optometry BSc students from City will be funded to undergo placements at the Institute over a three year period.