'Double duty actions' to address all forms of malnutrition needed, says a major new report published in The Lancet today. Co-authored by Professor Corinna Hawkes, Director of the Centre for Food Policy at City.

According to a new four-paper report published today in The Lancet, a new approach is needed to help reduce undernutrition and obesity at the same time, as the issues become increasingly connected due to rapid changes in countries’ food systems. This is especially important in low- and middle-income countries.

More than a third of such countries had overlapping forms of malnutrition (45 of 123 countries in the 1990s, and 48 of 126 countries in the 2010s), particularly in sub-Saharan Africa, south Asia, and east Asia and the Pacific.

“We are facing a new nutrition reality,” says lead author of the report Dr Francesco Branca, Director of the Department of Nutrition for Health and Development, World Health Organization. “We can no longer characterize countries as low-income and undernourished, or high-income and only concerned with obesity. All forms of malnutrition have a common denominator – food systems that fail to provide all people with healthy, safe, affordable, and sustainable diets. Changing this will require action across food systems – from production and processing, through trade and distribution, pricing, marketing, and labelling, to consumption and waste. All relevant policies and investments must be radically re-examined.”

Continuing with business-as-usual is not fit for purpose in the new nutrition reality. The good news is that there are some powerful opportunities to use the same platforms to address different forms of malnutrition. The time is now to seize these opportunities for ‘double duty action’ to get results.

In a Lancet editorial accompanying the report, Dr Richard Horton, Editor-in-Chief of The Lancet, says:

“Today’s publication of the WHO Series on the Double Burden of Malnutrition comes after 12 months of Lancet articles exploring nutrition in all its forms… With these and other articles across Lancet journals throughout 2019, it has become clear that nutrition and malnutrition need to be approached from multiple perspectives, and although findings have sometimes converged, there is still work to be done to understand malnutrition’s multiple manifestations… With six years remaining in the UN Decade of Action on Nutrition, this Series and Comment define the future direction required to achieve the global goal of eradicating hunger and preventing malnutrition in all its forms.” 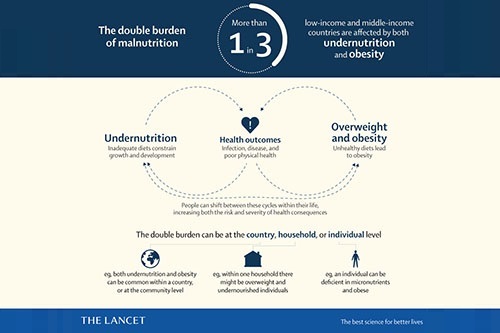 Globally, estimates suggest that almost 2.3 billion children and adults are overweight, and more than 150 million children are stunted. However, in low- and middle-income countries these emerging issues overlap in individuals, families, communities and countries. The new report explores the trends behind this intersection – known as the double burden of malnutrition – as well as the societal and food system changes that may be causing it, its biological explanation and effects, and policy measures that may help address malnutrition in all its forms.

In the 2010s, 14 countries with some of the lowest incomes in the world had newly developed a double burden of malnutrition, compared with the 1990s. However, fewer low- and middle-income countries with the highest incomes were affected than in the 1990s. The authors say that this reflects the increasing prevalence of being overweight in the poorest countries, where populations still face stunting, wasting and thinness.

High-quality diets reduce the risk of malnutrition in all its forms by promoting healthy growth, development, and immunity, and preventing obesity and non-communicable diseases (NCDs) throughout life. The components of healthy diets are: optimal breastfeeding practices in the first two years; a diversity and abundance of fruits and vegetables, wholegrains, fibre, nuts, and seeds; modest amounts of animal source foods; minimal amounts of processed meats, and minimal amounts of foods and beverages high in energy and added amounts of sugar, saturated fat, trans fat, and salt.

“Emerging malnutrition issues are a stark indicator of the people who are not protected from the factors that drive poor diets. The poorest low- and middle-income countries are seeing a rapid transformation in the way people eat, drink, and move at work, home, in transport and in leisure.

“The new nutrition reality is driven by changes to the food system, which have increased availability of ultra-processed foods that are linked to increased weight gain, while also adversely affecting infant and pre-schooler diets. These changes include disappearing fresh food markets, increasing supermarkets, and the control of the food chain by supermarkets, and global food, catering and agriculture companies in many countries.”

Exposure to undernutrition early in life followed by becoming overweight from childhood onwards increases the risk of a range of non-communicable diseases – making the double burden of malnutrition a key factor driving the emerging global epidemics of type 2 diabetes, high blood pressure, stroke, and cardiovascular disease. Negative effects can also pass across generations – for example, the effect of maternal obesity on the likelihood of the child having obesity may be exacerbated if the mother was undernourished in early life.

Despite physiological links, actions to address all forms of malnutrition have historically not taken account of these or other key factors, including early-life nutrition, diet quality, socioeconomic factors, and food environments. In addition, there is some evidence that programmes addressing undernutrition have unintentionally increased risks for obesity and diet-related NCDs in low-income and middle-income countries where food environments are changing rapidly.

While it is critical to maintain these programmes for undernutrition, they need to be redesigned to do no harm. Existing undernutrition programmes delivered through health services, social safety nets, educational settings, and agriculture and food systems present opportunities to address obesity and diet-related NCDs.

The report identifies a set of ‘double-duty actions’ that simultaneously prevent or reduce the risk of nutritional deficiencies leading to underweight, wasting, stunting or micronutrient deficiencies, and obesity or NCDs, with the same intervention, programme, or policy. These range from improved antenatal care and breastfeeding practices, to social welfare, and to new agricultural and food system policies with healthy diets as their primary goal.

To create the systemic changes needed to end malnutrition in all its forms, the authors call on governments, the UN, civil society, academics, the media, donors, the private sector and economic platforms to address the double burden of malnutrition and bring in new actors, such as grass-roots organizations, farmers and their unions, faith-based leaders, advocates for planetary health, innovators and investors who are financing fair and green companies, city mayors and consumer associations.

“Given the political economy of food, the commodification of food systems, and growing patterns of inequality worldwide, the new nutrition reality calls for a broadened community of actors who work in mutually reinforcing and interconnected ways on a global scale,” says Dr Branca. “Without a profound food system transformation, the economic, social, and environmental costs of inaction will hinder the growth and development of individuals and societies for decades to come.”

The event will be held at City, University of London, 1-3pm GMT this afternoon, and is fully booked.  It will be webcast live to the public via Echo360.

Read the agenda on the World Health Organization website.

For further details of the event, visit the World Health Organization website.

The event will be held 2-4pm CET, Wednesday 18th December 2019, hosted in Salle A, WHO Headquarters, Geneva.

Read the agenda on the World Health Organization website.

Webcast live to the public, watch the launch on the World Health Organization website.

Read the profile of Professor Hawkes published alongside the report today in The Lancet.

Read the two-sider brochure from The Lancet and WHO outlining the key messages of the report.