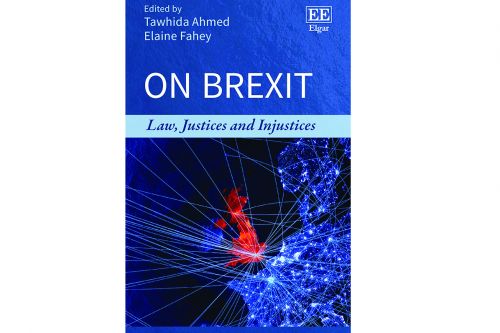 Reader in Law Dr Tawhida Ahmed, has co-edited a new book with Professor Elaine Fahey which examines how Brexit is intertwined with the concepts of justice and injustice.

Their book, On Brexit: Law, Justices and Injustices is published by Edward Elgar Publishing. It draws on a variety of case studies from consumer law, asylum law, legal theory, public law and private law, to explore the impact of the UK’s departure from the European Union on ideas of justice. Divided into 18 chapters, the book’s contributors include academics working and researching in the area of EU Law.

On Brexit: Law, Justices and Injustices takes a bird’s-eye perspective on the diversity of methodological and analytical approaches within legal studies to Brexit. What do these approaches tell us about the intellectual robustness of our study of Brexit?

This book seeks to be more explicit about the existence and nature of these approaches in our study of Brexit.

The EU is the epitome of a globalised world - an organisation with a huge number of members, partners and collaborators, seeking to further common goals, and pool resources to address shared concerns.

Much attention has been traditionally paid to the question of justices or injustices as regards the impact that entering into, or increasing, such global relations has on individuals or groups. This project analyses the reverse: What justice or injustice is brought about by withdrawal therefrom?