Professor Lis Howell led the event, which was jointly arranged by City, the BBC and ITN

In a unique collaboration between the BBC, ITN and City, University of London, the institution recently hosted the second of its special days for expert women.

The aim of the Expert Women training programme – which has been undertaken by over 200 women and was instigated and run by the BBC Academy – is to build confidence for women experts through helping them engage with the media.

The participants at the 2019 Expert Women Extra had been on one of the BBC Academy days for expert women and had applied to come to City for a special ‘top-up’. Most had increased their TV and radio appearances and wanted to do more.

They were introduced to ITN (which provides news for ITV, Channel 4 and Channel 5) and also given a journalist’s eye view of how programmes are put together.

The 25 experts came from areas as diverse as dementia research and sex education, with the more conventional fields of business, health, politics and law also well represented. 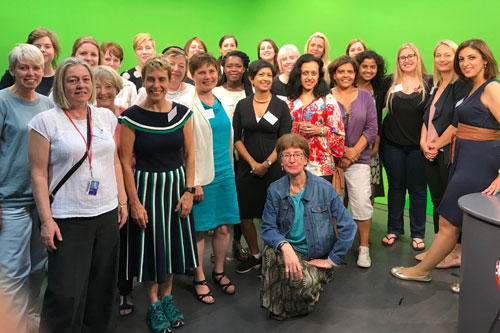 The BBC Academy’s decision to launch the Expert Women initiative was a direct response to a series of City surveys which started in 2014 and showed that, at that time, male experts outnumbered female experts by 4:1 overall, and by 6:1 on some individual programmes.

Although the number of women experts on news programmes has doubled since City began surveying, over twice as many male experts still appear on the flagship news programmes monitored by the project.

The ratio of female-to-male expertise in society can be estimated as 70 per cent male and 30 per cent female, which equates to approximately 2:1. But some broadcasters still have three times as many male as female experts on their programmes.

Often journalists blame women experts for being reluctant to appear but the numbers of women applying for the BBC confidence building days, and the City top-up, would offer a strong counter-argument to that assumption.

Midway through the day the group visited ITN to hear the news at 1.30pm, meet ITN News Editor Carly Watson, and see the studios.

Professor Howell said: "It was a great to host a second Expert Women Extra event and to work with the BBC and ITN.

“The participants were brilliant and the standard of broadcast contribution was really high – broadcasters who fail to invite these women onto their programmes are really missing out.

“After our 2018 top-up event we decided that this year’s Expert Women Extra should focus on practical skills and on seeing it from the journalists’ point of view – how stories are chosen, why they are dropped, and how they can be best presented.

“It was great to see how these women rose to the challenge.”

The Expert Women Extra sessions follow the 2018 Women on Air conference, which was hosted by Professor Howell at City and brought together leading journalists and MPs to discuss the representation of women in the media.

New figures will be released in autumn 2019, when Professor Howell hopes to launch a website curating all the work – and the impact – of the Expert Women project.

To keep tabs on the project, search Twitter for the hashtag #bbcexpertwomen and click on the ‘latest’ search results.