City, University of London confers the honorary degree of Doctor of Science to Mrs Gordon for her achievement in and services to health science.

During it’s summer Graduation Ceremony 2019, City, University of London conferred the honorary degree of Doctor of Science to Mrs Helen Gordon for her achievements in the field and services to health science.

Helen Gordon is currently the Chief Executive of the Science Council, which provides the quality assurance system for practising scientists and science technicians in the UK.

Her career in health care spans 36 years. She trained as a nurse at St Bartholomew’s Hospital and graduated in 1985.

Mrs Gordon’s nursing career had a profound impact on her.  It provided her with clinical skills and early experience in management and leading and developing others.  She has praised the strong nursing role models she worked with who inspired her with their blend of clinical, operational and leadership skills, underpinned by compassion and humanity.

She went on to hold several clinical and managerial positions in hospitals in the NHS rising to the role of Chief Nurse at Hillingdon Hospital and subsequently Chief Executive. From 2000 to 2005 she led Queen Mary Sidcup NHS Trust in South East London as their Chief Executive.

Mrs Gordon then moved to national roles supporting the development of health professionals, with her appointment as Chief Executive of the Royal College of Obstetricians and Gynaecologists.

From 2010 to 2017, she was Chief Executive of the Royal Pharmaceutical Society where she developed the Society as the newly dedicated professional membership body for pharmacists in Great Britain. 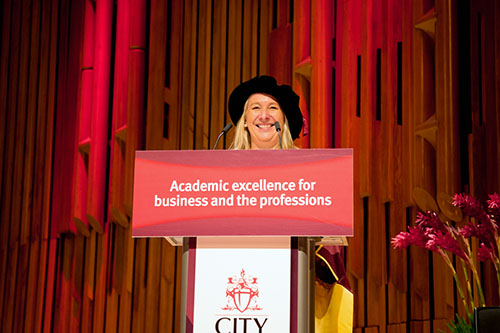 She then led the Royal Society of Medicine, one of the country’s major providers of postgraduate medical education, before taking up her current role at the Science Council in February.

Helen Gordon is an Honorary Fellow of the Royal College of General Practitioners, a Council member of the University of Reading and chair of the Alumni and Development Board at Henley Business School, where she achieved an MBA in 1997.

She retains her identity as a nurse and serves as an important role model for nurses, midwives and healthcare professionals. In 2017, she discussed her career as part of the annual Athena SWAN Lecture series at City. In the lecture, she highlighted the importance of her nursing background and the influence upon on her future leadership of St Bartholomew’s Hospital, a long-term strategic partner of City. 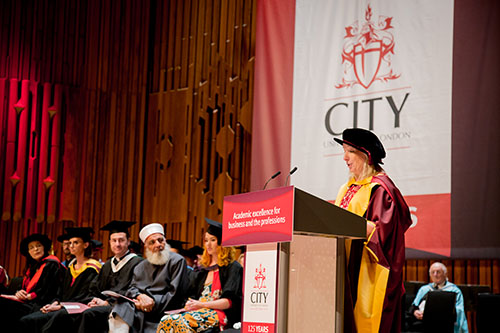 Speaking to graduands at the summer ceremony, Mrs Gordon said:

"I’m delighted, yet humbled to be receiving this honorary degree today, especially as it’s in recognition of what I simply have loved doing throughout my career.

“I’m fortunate to have had many opportunities to develop and therefore be prepared for new opportunities through my life, and committing to continuous development has helped me to get where I am today.

“Continuing your development is probably the last thing on your mind on this graduation day, but what kind of development will help in this age of digital acceleration where roles and opportunities are changing fast in tandem with technological change?

“I’d like to suggest that as well as keeping up to date on advances in your specific discipline, and about technology, that actually focusing on your skills as a human being is as or even more important."