Speakers and attendees from around the world have gathered at City, University of London to share global perspectives on how to develop and deliver a national food policy

City, University of London’s Centre for Food Policy has today hosted its annual City Food Symposium, which aims to equip participants with information and perspectives that can help inform the development and delivery of a national food policy.

Always a popular event, this year’s programme was fully booked, with the vast majority of attendees having links to food policy or the food industry.

The event, which is generously sponsored by the Worshipful Company of Cooks, also saw the launch of the Centre’s new briefing, the first in a series on 'Rethinking Food Policy', titled 'Tackling food systems challenges: the role of food policy'.

Professor Corinna Hawkes, Director of the Centre for Food Policy, kicked off proceedings by welcoming the audience and introducing the topic of the day – ‘How to develop and deliver a national food policy: a global perspective'.

“Food is an important part of community resilience,” she said, while also referencing the urgency for action in rethinking food policy as an exciting solution amid interconnected problems such as climate change, poverty and migration.

“A national food policy is symbolic in a way,” she said. “It means that the government has recognised the importance of food.”

“Food policy contributes to so many of the world’s problems today. It has the potential to do so much good in the world. I get really excited by this and I want others to be excited by this, too.”

“If a national food policy can consider problems and solutions in synergy, it becomes something radical, something that goes to the root of the problem,” she said.

The first speaker of the day was Henry Dimbleby, Co-founder of the Leon restaurant chain and a Non-Executive Director of the UK Department of Environmental, Food and Rural Affairs (Defra).

Dimbleby has been tasked with delivering a new national food strategy and spoke eloquently about the challenges ahead. He focused his talk on why food strategy is important to the UK, what the approach will be, and how we can work together to create the best possible way forward for the country.

“The agricultural revolution has come at a huge cost to our environment,” he said, while also highlighting the effect food production has on national identity. “One in eight of us earns our livelihood through food. Being a nation that can feed itself is a vital part of our national sense of belonging." 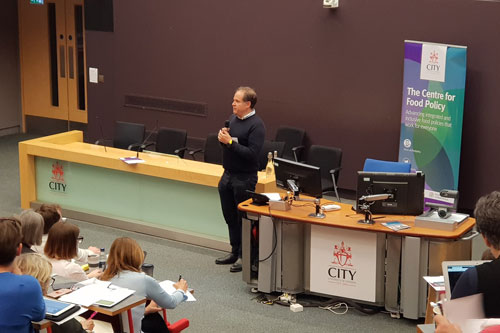 Dimbleby, acknowledging that some form of climate change is inevitable, also stressed that such a daunting prospect also creates opportunities.

“Nothing last forever. Some cities will go underwater. But we can mitigate the damage,” he said.

“We are right at the beginning of what is going to be an extraordinary, frightening, exciting chapter in our history. The Holocene [the current geological epoch] is not going to last forever. Solutions will have to be radical and uncomfortable.

“Do we have a society that’s prepared to give something up in order to have something better?”

After an address by Lt Colonel Marcus Appleton, The Master of the Worshipful Company of Cooks, the conference moved on to country-specific short talks.

The importance of focus groups

Giving an English perspective, Emily O’Brien from the Brighton and Hove Food Partnership emphasised how talking to frontline workers is insightful because “they notice patterns happening”.

O’Brien spoke of the work her organisation does in Brighton with focus groups. She said that engaging people who are experiencing food poverty in finding solutions is vital, albeit not without its challenges.

“It can be too tokenistic if you only involve a small number of people. Those most at risk are the least likely to be able to participate, so it’s important to ensure that people get paid when they are consulted,” she said.

The Symposium continued in the afternoon with a series of workshops, followed by a presentation by Centre for Food Policy Research Fellow Dr Kelly Parsons, which led on to a panel discussion tasked with debating a national food strategy for England.

Professor Hawkes introduced the diverse panel of key thinkers in food policy. They were (from left to right in the image below): 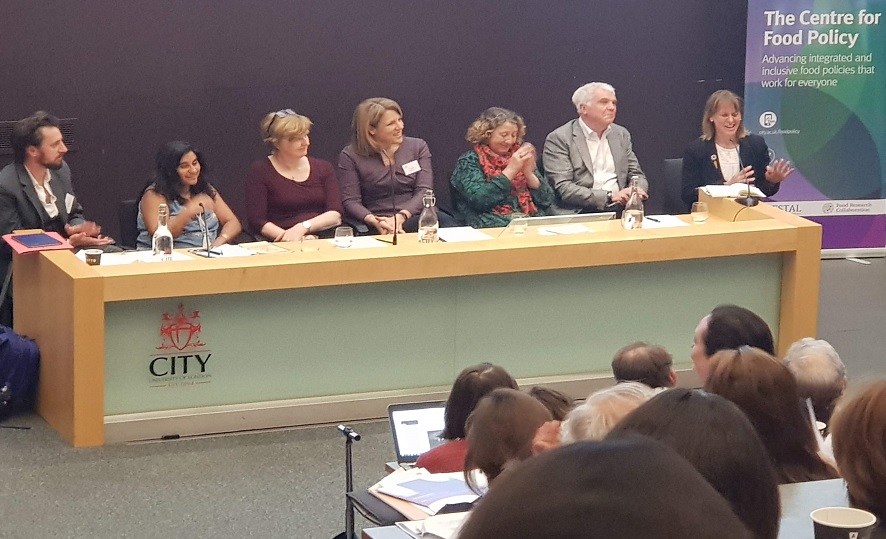 Tim Smith summed up the current mood, saying: "I find it difficult to explain to my kids why all of us haven't done more."

"We need absolute leadership from the top - by which I mean Number 10. We need to be accountable; we've got to be able to say to the next generation: this is what we did."

Ruth Davis received a round of applause from the assembled delegates when she said: “People who say 'food has to be cheap, so the poorest can afford it' are often the very rich using the very poor as a shield against any attack on their interests."

Sarah Bradbury noted that the worst-off 10 per cent of people nationwide need to use 74 per cent of their disposable income in order to eat well. "We have to change that," she said. "We need to proactively encourage a healthy and sustainable diet that is successful for all households."

And Ben Reynolds, in response to a question from an audience member about whether people's low salaries affecting their food choices, said: "Wages in the food sector are too low. People are working in supermarkets but then using food banks, so wages need to be included in discussions more."

After the panel had concluded answering questions, Anna Taylor OBE, Executive Director of the Food Foundation, gave closing remarks and said that those present have to make sure that the national food policy is actually implemented.