A performance from a Parisian choir, along with prominent French musicians and composers, made for a memorable evening for City staff, students and members of the local community

The event was attended by staff, students, local residents and others. It is the latest in an ongoing series of partnerships between City and Université PSL.

There was a visit to Paris by City, University of London’s Chamber Choir in 2018, during which the combined European choirs performed Brahms' Ein deutsches Requiem. And earlier in April 2019, City Music students travelled to Paris to sing in a joint concert as part of a PSL festival.

Professor Chris Greer, Dean of the School of Arts & Social Sciences, welcomed the audience and explained that the School is committed to the public good and developing a strong sense of cohesion with local residents. He said:

“Events like this are an opportunity for us to come together with our local community. City is a civic institution with a responsibility to make the world a better place.”

Dr Alice Mesnard then introduced the guest performers, including the choir, who are all students of Université PSL.

Many religious hymns are perceived as freedom songs, but the very essence of music is emancipation. A great number of cultures developed traditions of song to counter oppression, or express the joy of mere survival through wartime.

The concert included diverse songs symbolic of this idea, ranging from 'We Shall Overcome', sung on civil rights marches led by Martin Luther King, 'Nkosi Sikelel' iAfrika', widely adopted as a counter-Apartheid statement, and music by Johann Sebastian Bach, composed in Leipzig a generation after the horrors of the Thirty Years War.

The full programme was: 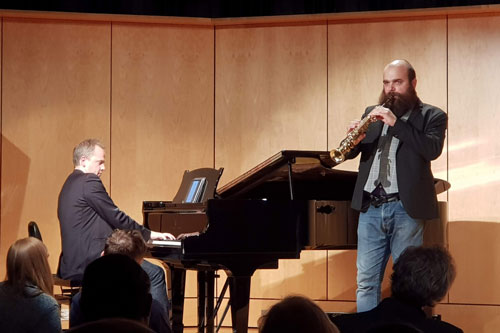 A highlight of the evening came with three consecutive pieces from well-known movies, with When You Wish Upon A Star (Pinocchio, 1940) being swiftly followed by Do-Re-Mi and My Favorite Things (both from The Sound of Music, 1965), with Imbert giving a virtuoso performance on soprano saxophone throughout.

Imbert later introduced his piece, Man Came to Jesus, by explaining that he wrote it in tribute to Dr Martin Luther King after being inspired by his 3rd April 1968 ‘I've Been to the Mountaintop’ speech, the final oration he ever gave before his assassination the following day.

“This was an amazing and deep speech, given in a church. For me, it’s one of the most important poems of the 20th century,” he said.

About the Symphonic Orchestra and Choir of Université PSL

OSC-PSL comprises around 80 instrumentalists and 80 singers, who are students, researchers or teachers affiliated with PSL University, coached by professional musicians.

Under the directorship of conductor Johan Farjot, OSC-PSL plays around fifteen concerts a year, in France and on international tours (China 2014 and 2019, UK 2015, Israël 2016, Bulgaria 2017), with guest soloists or up-and-coming young professional musicians. 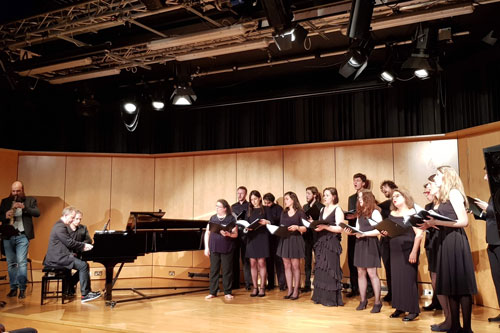 Excellence, cross-disciplinarity and creativity form the backbone of Université PSL. Founded in 2011 and awarded ‘Investments for the Future’ funding from the French government, PSL encompasses a number of prestigious schools and institutions covering the arts, sciences, engineering, humanities and social sciences, united by historical relationships, and cultural and geographic proximity.

For details of other upcoming concerts at City, University of London, including the City Summer Sounds Festival 2019, click here.