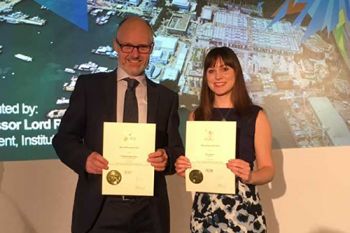 The majority of Mr Dennis' engineering career was spent in the appropriate technology sector, researching and developing equipment tailored to the needs of poor rural communities, mainly in sub-Saharan Africa, but also in Asian countries such as Nepal.

Mr Ron Dennis passed away almost two years ago at the age of 79.

He spent many years with the charity, Intermediate Technology Transport, and in higher education. In 2004, he joined Developing Technologies, set up by Professor Pullen and his wife Fiona. The charity was initially based at Imperial College London before moving to City to join Professor Pullen in 2008.

The work of Developing Technologies involves setting up engineering student projects with the joint aim of helping small non-governmental organisations in developing countries solve technological problems and educating students by encouraging them to work in this field.

The charity has worked in collaboration with Engineers Without Borders.

Mr Dennis' Award was collected by his daughter Emily at a ceremony held by the ICE, also attended by Professor Pullen.

The winning research paper, which was only partially written at the time of Mr Dennis' passing, was completed by Professor Pullen; the challenge of doing this in his absence almost led to Professor Pullen's inability to complete the work.

The extra effort that had to be put in was made all the more worthwhile given that the paper won the ICE's Rees Jeffreys Award, particularly so, considering that Ron and I were trained as mechanical engineers.