The former Chief Executive Officer of Lloyd’s of London, Dame Inga Beale DBE, discussed her wide-ranging career during a talk for the Global Women’s Leadership Programme at Cass Business School.

Ms Beale gave her views on modernisation, diversity and leadership, and spoke of her plans for the future as she leaves Lloyd’s after five years.

She was interviewed by the Director of the Global Women’s Leadership Programme, Dr Canan Kocabasoglu-Hillmer, who introduced Ms Beale as “an inspirational example of a female business leader at the very top of her game.”

Asked what advice she would give Cass students who wanted to build their confidence and network to succeed in their chosen career, Ms Beale said students should “believe in their own ability” and stressed the importance of being yourself.

“You all have amazing strengths and skills – don’t feel you have to be perfect to be good enough.  Get feedback from other people, build your support network and find mentors and sponsors,” she said.

To build their confidence, Ms Beale recommended that students “find the thing that feels most scary and do this.” 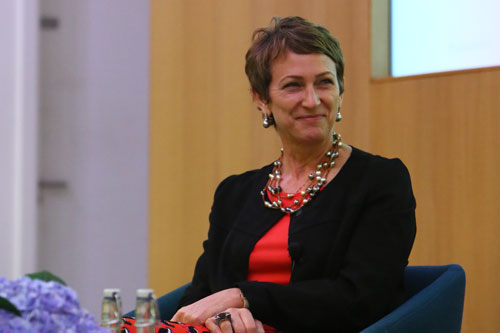 Ms Beale discussed her modernisation programme at Lloyd’s, where she transformed the 300-year-old insurer from a paper-based business into a modern organisation which is now actively embracing digital technology. She highlighted the importance of including all people in the transformation process and communicating effectively so that they understand why change is being made and can craft their own futures.

As well as driving a modernisation agenda, Ms Beale has been credited with spearheading a diversity and inclusion initiative at Lloyd’s which revolutionised the company’s culture.  She spoke about the importance of encouraging people to talk about their differences and said because people often automatically expect the woman to talk about diversity, it is vital to have male allies to do some of the talking for you.

“At Lloyd’s I encouraged people to change their language and use words that they hadn’t used before but are quite normal to use now – lesbian, gay, bisexual, for example.  You have to empower people to have open conversations about religion, race and gender and to understand different points of view.  Unless people respect and understand difference, we won’t move forward.”

Ms Beale discussed how difficult it was to build trust in business at a time when, following the Brexit referendum, people doubt politicians, business and the media.

“This is a difficult time.  People want to challenge the status quo, are disenfranchised and the gap between rich and poor is widening.  There is a new pressure for CEOs to get the balance right between doing good in the community and running capitalist markets.”

Speaking about her high-profile comments on the gender pay gap on the BBC Radio Four Today programme earlier this year, Ms Beale said she was at a stage of her career that she feels she can speak out about these issues.

“You gain confidence the older you get and the more experience you have.  I’m at a stage of my life where I can speak out – and if I don’t do it, who will?”

She stressed the importance of transparency in gender pay discussions, suggesting that companies should “be open and transparent and admit you have a problem then trying to hide it.  Transparency builds trust.” 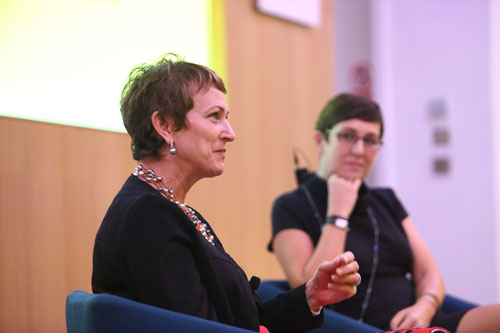 Ms Beale has just started garden leave from Lloyd’s and she said she looked forward to taking another executive role in the future and wanted do “something challenging and interesting.”

Speaking at the event, Dr Canan Kocabasoglu-Hillmer said: “We are delighted to welcome Inga to Cass tonight.  She is an outstanding role model for all of our students – men as well as women.  She truly leads by example and her strong record on modernisation, diversity and leading change speaks for itself.  I’m glad that our students were able to listen to, and learn from, her tonight.”

The Cass Global Women’s Leadership Programme supports women who want to grow and are seeking their unique version of success; a success that can go well beyond corporate or entrepreneurial leadership to include community involvement, mentoring and other initiatives.  The programme coordinates scholarships for bright, high potential women to study at Cass, organises events with inspiring speakers to equip and empower women for leadership and connects women by nurturing networks for their success.  Find out more here.

The next Cass Global Women event will be Progression of Female Leaders: The Power of Numbers in Closing the Gap.  It will be led by Executive MBA Global Women’s Leadership scholar Kylie Poole who will moderate a conversation with four senior executives to explore the importance of networks, the power of confidence and the power of data in making a case for women.  Sign up here.