A City student has combined lights and strings in first of its kind instrument.

Lilja Maria Asmundsdottir, (MA, Composition), has created a string instrument called the Hulda, which produces both sound and light when played. 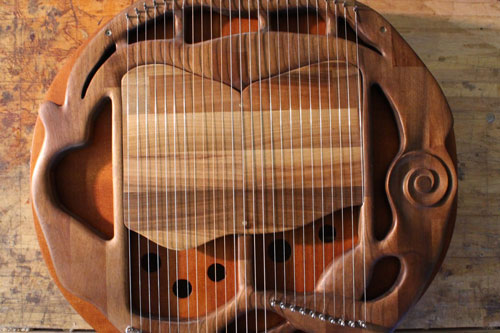 Lilja said: “I wanted to create a link between music and visual art. Music is constantly changing as you hear all different kinds of sounds. The Hulda reflects this, as when different strings are played you will see different coloured lights coming from the built-in projector.

“The sounds are picked up by a computer which measures the frequency and determines the colour of the lights. You can pluck the strings or play them with a bow, and the brightness and darkness of the colours are determined by how loud or soft the instrument is being played.

“I called the instrument the ‘Hulda,’ as this means the hidden one. At a first glance you see a wooden string instrument, but when it is played it creates colourful lights and projections. The Hulda shows that there is always more to what meets the eye.

“It is nice to have an instrument that no one has played before, as I can experiment and practise however I want. For me, the Hulda attempts to find common ground between artists and composers, as it offers them both a visual and audial performance.”