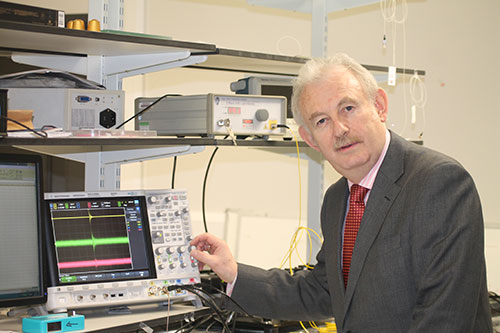 Royal Academy of Engineering-George Daniels Professor of Scientific Instrumentation, Professor Ken Grattan, has been elected a Foreign (Honorary) Member of the Romanian Academy of Science.

Professor Grattan was earlier this month awarded an OBE in the Queen's Birthday Honours.

Professor Grattan has enjoyed over 25 years of cooperation with academic colleagues in Romania, especially with Professors Florin Vladicescu of the Technical University of Bucharest and Radu Catalin Tarca of the University of Oradea, in the field of instrumentation and sensing, supported by the European Commission, through several academic partnership schemes.

I am delighted to have been honoured by being elected as a Foreign Member of the Romanian Academy of Science.  It has been a pleasure to work and publish with Romanian colleagues over many years – a cooperation that continues through the work of City's Research Centre for Photonics & Instrumentation.  I look forward to extending this important academic partnership in the future as we develop new projects that exploit our complementary skills and interests.