The City, University of London speech and language therapist was included in this year’s Queen’s Birthday Honours list

Professor Jane Marshall, a speech and language therapist at City, University of London, has been awarded an OBE in the Queen’s Birthday honours list for services to aphasia, a condition which can lead to communication difficulties and the loss of speech following a stroke. 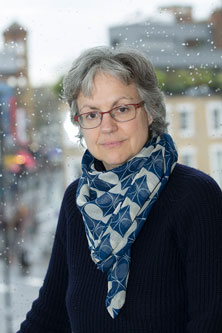 Qualifying as a speech and language therapist in 1987, Jane worked in the Aphasia Unit of Queen Mary's Hospital, Sidcup for three years before joining City in 1990. For the past 28 years she has led academic research on aphasia, helping to transform the lives of those affected by strokes and neurological damage.

A world authority on aphasia - and the author of over 70 journal articles, 16 book chapters and the co-editor of 2 books - the work Jane has led at City now figures in standard academic textbooks and is known around the world to students and clinical practitioners in the field.

In 2007 she won the Robin Tavistock Award for her work on aphasia and in 2009 was made a Fellow of the Royal College of Speech and Language Therapists. She has shown that aphasia can be remediated: that language impairments can be improved or compensated for through gesture and other non-verbal means; all critical findings for those living with the devastating effects of stroke.

Her PhD, funded by the Stroke Association, explored novel therapies for sentence production in aphasia. Since then Jane has investigated treatments aphasia, and has explored compensatory therapies, using writing, gesture and drawing.

Her most recent research has explored the contribution of digital technology to the treatment of aphasia, for example using 'speech to text' software to support writing, and Skype, to allow remote delivery of therapy and conversation practice. User involvement has also been a core part of her work, and studies have employed consultants with aphasia and have drawn on the advice of user groups.

Alongside  City colleagues, and with funding from the Stroke Association, she developed EVA Park, a virtual world in which people with aphasia can meet on the internet to receive therapy, practice conversation or receive social support.  EVA Park won the 2015 Tech4Good award and has received further funding both from the Stroke Association and The Tavistock Trust for Aphasia.

“I was very honoured to receive this award. I am lucky to be involved in work that is so enjoyable and interesting, and to be surrounded by such lovely colleagues and students. To get a medal for it feels like cheating.

“I hope this award will raise the profile of the aphasia research at City, of which I feel very proud. All of that research has been conducted with others, so thank you to all my colleagues who have sustained and supported me over the years.”

“The work that Professor Jane Marshall has conducted over 30 years has made a huge impact on the lives of people with aphasia, helping them to regain communication and the ability to speak following stroke.

“Jane is a world authority on aphasia.  Her research has changed countless lives and she has used her expertise to educate and develop generations of speech and language therapy students at City who continue to implement and further the work she leads.

“I offer Jane my warmest congratulations on this special and very well-deserved recognition of her achievements.”