A new study has found that the time and day that women give birth can vary significantly depending on how labour starts and the mode of giving birth. 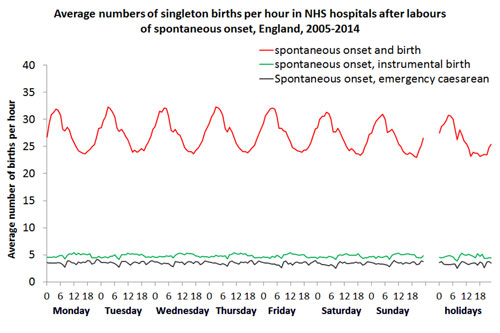 Conducting the first national analysis to look at all aspects of time of birth in England, researchers from City, University of London in collaboration with UCL (University College London) and the NCT, the UK’s largest parents’ charity, analysed over five million births over a ten year period in England.

Just over half of all births were spontaneous births following labours which started spontanously. These were most likely to occur between 1:00 and 6.59am with a peak around 4:00am, and a trough in the afternoon. They were slightly more likely to happen on weekdays than on other days.

Elective or pre-planned caesarean births accounted for 9.2 per cent of births and were seen to occur mostly on weekdays between 9:00 and 11.59am, with a pronounced peak between 9:00 and 10:59am. Very few occurred between 5.00pm and 6.59am on weekday evenings and nights, and even fewer at any time at weekends and on holidays. 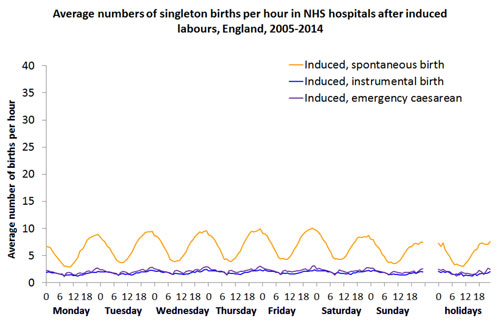 Differences between days were most pronounced among pre-planned caesarean births, which rarely occur at weekends or on public holidays, with the highest numbers recorded on Mondays and on weekdays after a holiday period, followed by Thursdays and weekdays before a holiday, reflecting staff working patterns.

Lastly, births after induced labours, which made up over a fifth of births, are more likely to occur at hours around midnight on Tuesdays to Saturdays and on days before a public holiday period. They are less likely to occur on Sundays, Mondays and during or just after a public holiday. Induced labours may lead to spontaneous births, operative births using forceps or ventouse or emergency caesareans. These three groups of induced births share a weekly cycle that has its highest peak on Friday night and its trough on Monday morning.

As in earlier analyses by day of birth, numbers reached their minimum level on Christmas Day and Boxing Day.

To investigate the time of birth, how labour starts and the mode of giving birth, the researchers linked data from birth registration, birth notification, and Maternity Hospital Episode Statistics and analysed 5,093,615 singleton births in NHS maternity units in England over a ten-year period from 2005 to 2014. They then used statistical analysis to establish how patterns of timing of birth vary by mode of start of labour, mode of giving birth and gestational age. The study is published in PLOS ONE. 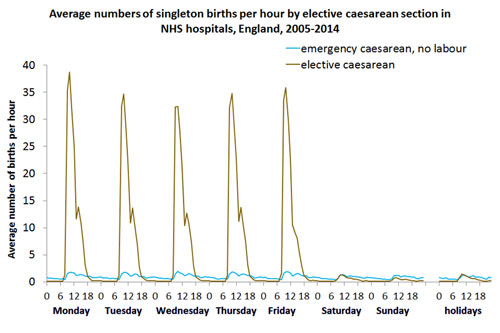 Patterns of spontaneous birth have remained unchanged in England since the 1950s, were documented in the nineteenth century and probably have a much longer history, but the researchers found that overall patterns of birth have changed since the 1950s, following the rise in rates of obstetric intervention from the latter half of the twentieth century onwards.

It was also seen that the rising rates of elective or pre-planned caesarean section have concentrated increasing numbers of births onto weekday mornings. In contrast, although the rationale for increasing rates of induction in the 1970s was to concentrate births into day time hours, the data from the study show that numbers of induced births peak at night, irrespective of the mode of giving birth.

As the timing of birth varies by how labour starts and the mode of giving birth, these patterns also have implications for midwifery and medical staffing. Appropriate levels of staffing are needed at all times in the evenings and at night.

Professor Alison Macfarlane, senior author of the paper, and Professor of Perinatal Health at City, University of London, said:

“It is known that obstetric intervention can influence the time of birth, but no previous analysis at a national level in England has yet investigated in detail the ways in which the day and time of birth varies by how labour starts and how women give birth.

“Pronounced differences were seen depending on how labour started and the mode of giving birth, with 71.5 per cent of births overall occurring outside the hours of 9.00 to 4.59pm. Current trends in obstetric intervention at birth may work in opposite directions. Rates of induction are now rising, and induced births are more likely to occur at night, while rates of pre-planned caesareans are also rising and these are likely to be scheduled for morning hours.

“The research should be of interest to policymakers, as policies to increase community births may lower rates of obstetric intervention and affect these trends and impact on the overall timing of birth.”

Dr Peter Martin, lead author of the paper, and a Lecturer in Applied Statistics at UCL (University College London) who conducted the research while at City, University of London, said:

“Long term experience and research from other areas has shown that human births without obstetric intervention are most likely to occur at night or in the early hours of the morning. This may be part of our evolutionary heritage. Our ancestors lived in groups that were active and dispersed during the day and came together to rest at night. So a night-time labour and birth probably afforded the mother and newborn baby some protection.

“This does not explain some of our other findings, however. It was not surprising  to find that planned caesarean sections are not usually scheduled on holidays, but it is not straightforward to understand why numbers of spontaneous births, without any obstetric intervention, were lower on Christmas Day and Boxing Day than on other days of the year. Selective obstetric intervention in preceding days could be an explanation but more research would be needed to investigate this.”

“I was pleased to be part of this study and to be able to engage a lot of women who work on Maternity Voices Partnerships from across the country. They told us what they and other women experience in maternity units during the evening and night. They wanted more midwives to be employed to increase the quality of care, to enable continuity of midwifery carer and prevent birth centres from closing due to staffing shortages."

"This study tells us parents aren’t bothered about the timing of the birth as long as it results in healthy mums and babies. So it’s worrying that induction appears to be timed so that the babies are most frequently born around midnight, when senior staff are less widely available to assist if complications arise.

“These findings should be acted upon by NHS managers to ensure their services provide women and babies with the best care at the right time."