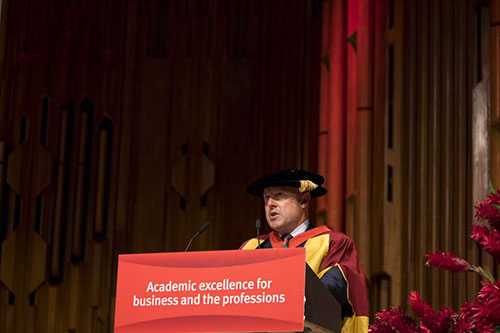 His Honour, Judge Nicholas Hilliard, has been awarded an honorary doctorate of laws degree during City, University of London's graduation ceremonies on Wednesday, July 18th.

He is the most senior of the permanent judges at the Old Bailey and has enjoyed a distinguished career at the Bar and on the Bench.

Accepting his honorary degree, Judge Hilliard called upon graduands to take responsibility for others.

So often what makes anything good at all out of a bad situation, in so many contexts, is one person taking some responsibility for someone else. And whether you have studied law, mathematics or computer science and engineering, there will be opportunities for you to do that if you want to. Sir Winston Churchill put it this way: “We make our living by what we earn, but we make our life by what we give.”

As a young boy, he was influenced by the popular television series, Crown Court, which captured his imagination and spurred his ambition toward the Criminal Bar.

Called to the Bar in 1981, Judge Hilliard‘s career involved criminal cases and inquests including appearances as Counsel to the Coroner at the inquests into the deaths of Diana, Princess of Wales, and of Jean Charles de Menezes.