City, University of London took part in the Lord Mayor of London’s recent visit to Tokyo which was intended to develop closer links between London and Tokyo, particularly in finance and business.  As part of the visit, City signed a Memorandum of Understanding (MoU) with Tokyo Metropolitan University (TMU) at the offices of the Tokyo Metropolitan Government.

Founded in 2005, TMU’s mission is ’to pursue the vision of an ideal human society in a metropolis.’ TMU is supported by the Tokyo Metropolitan Government and as a leading public university, focuses on cutting-edge interdisciplinary research on urban issues. In the Times Higher Education World University Rankings 2016-2017, TMU was ranked 9th (tie) among Japanese universities. Composed of seven faculties, 23 departments and seven graduate schools, TMU has approximately 7,000 undergraduates, 2,000 graduate students, and 1,000 faculty members across three campuses, making it 10,000 strong in its entirety.

The initial work with City will focus on collaboration between Cass Business School and TMU.

“We are pleased to confirm this exciting new partnership with TMU today. TMU is a respected and innovative institution and the work that we plan together will enhance the knowledge and experience of students and staff of both institutions as they prepare for work in an increasingly global world.  Both universities have an important role to play in their support of the future and the continued preeminence of their cities.  We look forward to working with TMU on mutually beneficial research, partnerships and exchanges.”

“My visit to Tokyo comes at a hugely exciting time for relations between Japan and the UK, with trade between our two countries in financial services at record levels.  The MoU between the City of London Corporation and Tokyo Metropolitan Government is already reaping countless benefits for both cities. I look forward to building on this success, and to strengthening the longstanding spirit of cooperation that exists between us.” 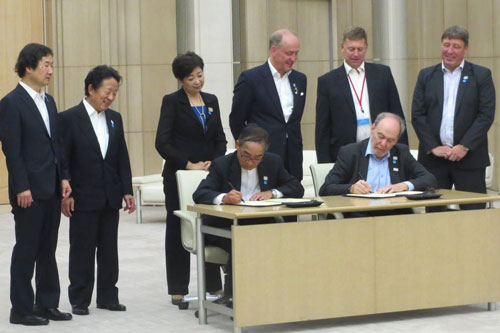