Award was received at the American Speech-Language-Hearing Association convention in Los Angeles, California

Researchers from the School of Health Sciences at City, University of London have received the prestigious Editor’s Award for their paper in the language section of the Journal of Speech, Language and Hearing Research. 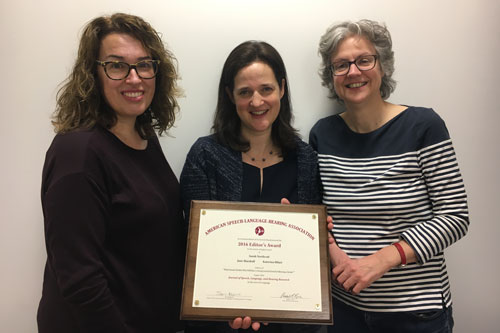 Awarded at the American Speech-Language-Hearing Association convention in Los Angeles, California towards the end of 2017, the prize was specifically given for a paper by Dr Sarah Northcott, Professor Jane Marshall and Professor Katerina Hilari which looked at how social networks are affected following a stroke.

The article highlights the vulnerability of social contacts following a stroke; having a language disability appears to make someone particularly at risk of becoming isolated. Stroke rehabilitation should consider how the stroke is affecting a person’s social relationships in order to support the person with stroke in navigating their recovery. In particular, social relationships provide the context in which communication takes place, so make a vital contribution to aphasia and language rehabilitation.

“We were honoured and delighted that our article on social networks post stroke received the 2016 Editor’s Award for the language section of the Journal of Speech, Language and Hearing Research. We hope our research raises awareness of the importance of taking a holistic approach within stroke rehabilitation, including exploring how the stroke is affecting a person’s social relationships. We also need to consider longer term social support and nurture on-going groups and other community supports which can make such a valuable contribution to people’s lives after a stroke.”

The article is available here